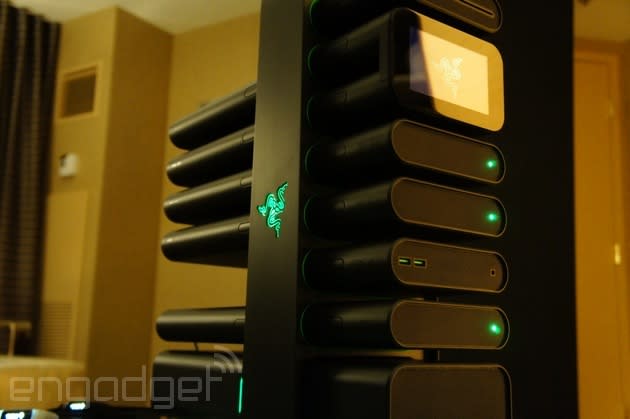 Razer's Project Fiona was all the talk of CES 2012 -- it married console-like controls with a tablet form factor, and packed in real computing power to boot. At the time, CEO Min-Liang Tan was cagey about its retail availability; heck, it didn't even have a product name at the time. By CES 2013, "Fiona" had become the Razer Edge, and Tan's tune changed from prototype talk to retail ready models.

At CES 2014, the cycle begins anew. Razer's introducing Project Christine this morning as the show officially opens and thousands of people descend on the Las Vegas Convention Center. Like Fiona before it, Christine is an ambitious project from an ambitious company: a modular-computing initiative with a form factor space aliens would appreciate. Fresh off 24 hours of travel, Tan excitedly jumped into pitch mode right after greeting us in a 48th floor Las Vegas hotel suite. Had we seen Razer's latest Adaro headphones? And how about Nabu, the new wearable Razer's also debuting at CES? Pay no attention to that shrouded table in the corner.

Of course, the shrouded table was where Christine resided: a massive black PC tower with varying sizes of individual pods (modules), a green underglow vignetting out from underneath its base, all cooled by mineral oil running vertically down the middle. Tan was smart to lead with Nabu and Adaro, as Christine easily sucks the air out of the room. Before we learned about what Christine does, just looking at the prototype was disarming enough. Frankly put, it looks like no other gaming PC we've ever seen. That's a good thing! In its own weird way, Project Christine is a beautiful piece of hardware. It looks like a computer sent from the future, after the Industrial Design Revolution of 2135.

Just look at those modules! Aren't they bizarre little pods? They enable a wide variety of setups -- from the tri-SLI GPU setup running on the reference model here to integrated processing and graphics on a single chip for less-hardcore users. The idea here is to both combat the waste in the PC world of buying annual hardware refreshes and to push back on massive price spikes for PC gamers. "We're really looking at other models," Tan told us. "Perhaps to say a subscription model of sorts, that we could interchange modules when they come in. Users don't have to worry about a huge bump every time there's new architecture out there." 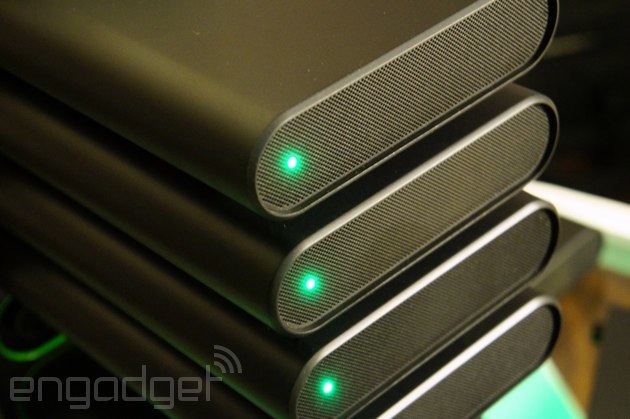 Of course, those modules have to be made by someone, and that someone will exclusively be Razer. As of right now, each module uses two self-sealing ports for literal plug-and-play functionality. Adding a new GPU is as simple as plugging one in to the back, and the same goes for more storage, RAM, ports or any other accoutrements you might want.

Modularity requires customization. Anyone who's tried installing a new video card knows how much fuss can go into even that relatively simple process, and Christine aims to cut that out. As such, the traditional motherboard is broken up into a variety of pieces and scattered throughout the middle spine of the tower. We're reticent to go into specs of the reference design, if only because it's just one of many, many builds one could create with Christine. Don't like that LCD screen? Swap it for a power button. Wanna go all digital and cut Blu-ray from your life? That's an option. The pieces of Christine that are set in stone, however, are the tower design and modular approach.

That said, Christine is still very much in the "project" stage. Tan's hoping Christine will generate as much buzz at CES 2014 as Fiona did before it, catapulting the ambitious product from concept to reality. If you ask us, our vote is in with a solid "yes." But our vote only counts for so much -- we'd suggest letting Tan know how you feel directly on Twitter so that we may see a finalized Christine at CES 2015. The cycle must continue!

In this article: ces, ces2014, hands-on, hdpostcross, minliangtan, pc, projectchristine, razer, TL16MODLR, video
All products recommended by Engadget are selected by our editorial team, independent of our parent company. Some of our stories include affiliate links. If you buy something through one of these links, we may earn an affiliate commission.