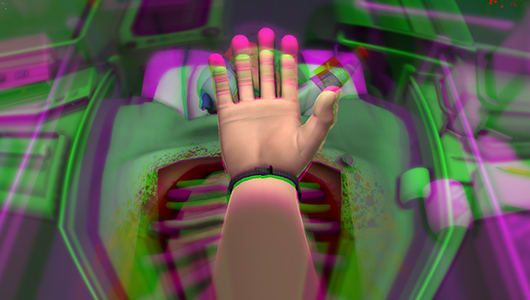 A new study published in the International Journal of Human-Computer Interaction has linked changes in visual perception and "pseudo-hallucinatory experiences" with intense video gaming. According to the study, intensive playing can cause the player's mind to perceive real-life objects through a gaming lens and can also create a situation in which the mind generates visual distortions based on gameplay.

Examples offered in the study, which was done by gathering 656 posts from 54 different forums, include a subject seeing the Mass Effect dialogue wheel in his or her mind during conversations and another mistaking in-flight airplanes for Modern Warfare 2 UAVs. Mentioned as a basis for the study are the visual "waviness" some gamers experience after long sessions with Guitar Hero, the "Tetris effect" that involves seeing how real-life items could stack after playing the famous puzzler, and "Minecraft sickness" in which gamers see square-shaped themes in everyday objects.

The full study breaks down a number of different types of gaming after-effects as reported by participants and proposes that the effects can be caused by "the interplay of physiological, perceptual, and cognitive mechanisms."
Via: Polygon
Source: Study Download
In this article: academia, academics, behavior, gaming, Guitar-Hero, hallucinations, international-journal-of-human-computer-interaction, mass-effect, Minecraft, modern-warfare-2, player, side-effects, study, Tetris
All products recommended by Engadget are selected by our editorial team, independent of our parent company. Some of our stories include affiliate links. If you buy something through one of these links, we may earn an affiliate commission.