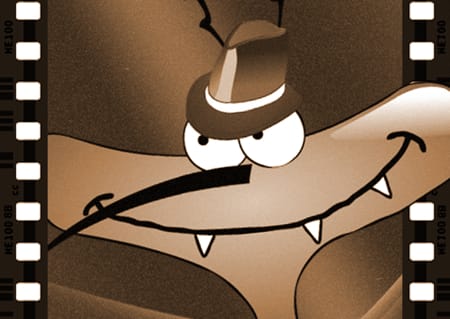 The Fleas is an iOS action game that tasks you with dispatching pests as they make their home on the back of your furry friend. It's interesting for two reasons: First, it has a retro art style the harkens back to the early days of cinema. The second reason is that it's priced at US$999.99.

The app was created by Vhlamlab, which, as far as I can tell, is comprised of a single person. His name is Sergiy Grachov and he lives in Cuba. I tracked Grachov down purely out of curiosity's sake, but what he shared with me shows that despite Apple reportedly tweaking its App Store algorithms, it's still entirely possible to game the marketplace for profit.

To be clear, Grachov emphasized that he has never engaged in these scam techniques himself, but he has seen them utilized firsthand.

It all begins with an otherwise unremarkable app suddenly skyrocketing in price, oftentimes all the way to the App Store's limit of $999.99. The developer, or whoever is orchestrating the scam, wires a massive amount of money -- Grachov used $10,000 as an example -- to a second party. That individual then purchases 10 copies of the app, exhausting the available funds and indirectly paying $7,000 of the original deposit back to the developer. Apple takes its 30% as usual. 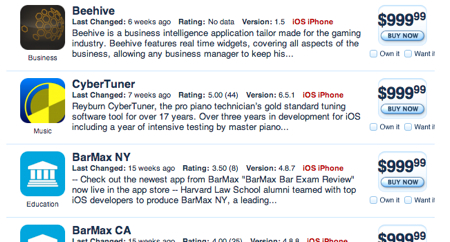 The App Store sees $10,000 worth of money changing hands over the app and, as Grachov says, "like magic" the app appears on the Top Paid apps list. (Note: It's more likely that this trick would land you on the Top Grossing list, rather than Top Paid.) How close do you get to the no. 1 spot, for what is essentially a $3,000 App Store bribe? Anywhere from no. 18 to no. 13, according to Grachov.

Once the app has reached its highest point, the developer drops the price back to the one- to two-dollar range, and it gets at least a few hours of top-app sales before disappearing back into the ether. Whether the $3,000 investment is worth the eventual payoff depends on its performance during this relatively small window.

So why is The Fleas priced so high, if not to benefit from a shady pricing scheme? The app has seen a huge range of price changes, from free to $0.99, to $99, to $299, and of course all the way to $999. Grachov says the price will now remain at $999 forever due to the fact that, believe it or not, people have actually bought it at that price.

Apple's App Store algorithm changed a bit in 2013 in an effort to weed out low-rated apps on the top app charts, but it definitely hasn't been a universal fix. There are currently 10 apps on the top 200 paid list that are rated 2.5 stars or less, and there's even a one-star rated game hanging around.

Apple's effort against App Store scams is shrouded in secrecy, just like everything else the company does behind the scenes, so there's really no way of knowing if the company has an answer for a paid app trick like this. Strangely, we are left to rely on the word of those who report that the world of gaming the App Store is still alive and kicking.

In this article: 999.99 iphone app, 999.99iphoneapp, app store, apple ios, appleios, games, highest grossing apps, highestgrossingapps, http://www.tuaw.com/2014/01/10/the-strange-shady-world-of-1-000-, iOS, iPhone, scams, strange apps, strangeapps
All products recommended by Engadget are selected by our editorial team, independent of our parent company. Some of our stories include affiliate links. If you buy something through one of these links, we may earn an affiliate commission.