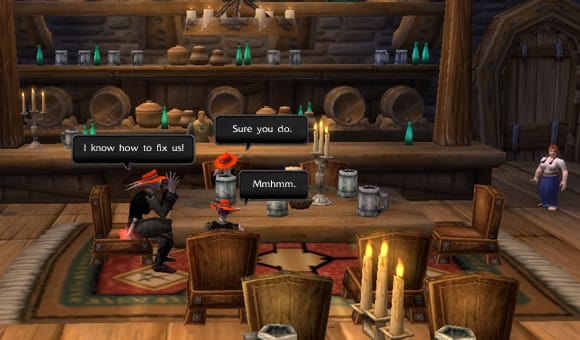 Stop me if you've heard this one before: Three rogues walk into a bar. ...

Mute, the assassination rogue: Man, I am exhausted.

Toetoe, the combat rogue: You're always saying that.

Toetoe: I dunno; you seemed pretty spry during our last raid.

Mute: That's just because we were buffed out the wazoo. I mean, sure, I feel better than I did back in Mogu'shan, but --

Toetoe: Ha! I remember that! You were stabbing so slowly you just gave up and started chucking shuriken instead.

Mute: Har har. Buy me a drink, will you?

Toetoe: Barkeep! Hey. Jack and Coke for me; Thistle Tea for my ever-tired companion.

Toetoe: And a Sneaking Potion for my little friend here.

Hush: I didn't scare you?

Toetoe: You've been standing right in front of me, Hush. Stealth ain't invisibility.

Toetoe: You wanna find my weakness? Make me wear that damn Nine-Tail Battlegear again. When my adrenaline got pumping with that stuff on, I was swinging my axes so fast that my Sinister Strike became a Sinister Blur. Thank Elune we only had to kill Lei Shen once; I was cramping up something fierce by the time we got through the Throne of Thunder.

Mute: Hey, at least you were there. I spent that entire raid at home, sleeping, because I didn't have anything to stab anyone with. I mean, come on: Megaera was a huge, angry lizard. She killed, like, hundreds of thousands of people. Are you telling me that none of her heads swallowed a single dagger that entire time?

Toetoe: I'm telling you, Mute, it was her powerful digestive juices.

Mute: Whatever. This Thistle Tea is weak.

Toetoe: You've been saying that since we got to Outland. Find something new to complain about.

Toetoe: I thought you were tired!

Toetoe: Yknow what I'm getting bored and tired of? 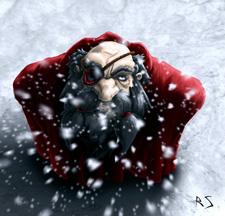 Mute: Ah, it's no use talking to you. You've had a great time in Pandaria. That flurry you do with your blades absolutely destroyed those stone dogs, and --

Toetoe: It's not as cool anymore as it used to be.

Mute: Quit grumbling; you're still devastating out there. You don't want to know what kind of effort I have to put in when I'm surrounded by five baddies. And when you go on your crazy killing sprees? That is some scary damage you put out. Me? I get pissed and start wildly screaming "Vendetta! Vendetta!" over and over again -- yet nothing actually feels different.

Toetoe: Yeah, that is pretty lame.

Mute: And you can make your axes look like swords. I still don't get how you do that.

Toetoe: Ugh, enough with the self-pity, already! You still get invited to our raids! Once you actually got your daggers, you started putting out as much damage as anyone -- more, even!

Mute: That's part of the problem, Toe. It's not even a challenge. Some days it feels like I could just go up to a boss, close my eyes and swing my arms in a circle, and my poisoned knives do almost all the work for me. What sets me apart from a rogue who barely knows what they're doing?

Hush: Oh, am I part of the conversation now?

Hush: Sometimes I feel like everyone pretends I don't even exist.

Toetoe: Hey, you teach me how to do that fancy shadow-dancing thing you do, and I'll make sure you're the life of the party.

Hush: It's an acquired skill.

Mute: It's cool. You're, like, a real ninja when you're doing that.

Hush: Yeah, but everyone assumes I won't be able to do it right. You guys may think it's bad that you have it so much easier, but doing things the hard way sure hasn't turned out to be a good way to become more popular.

Toetoe: I don't know why I go out with you guys. You're such buzzkills.

Mute and Hush: Well, we do all have a lot in common.

Toetoe: You think so?

Mute: Well ... OK, no, not really. It just feels that way sometimes. Look, I know people assume I'm the one to turn to when we've got a single baddie to burn down, and you're the go-to rogue when it's more than that, but --

Mute: What about you?

Hush: When am I the one to turn to?

Toetoe: Barkeep, please give this rogue a shot of rum to shut her up until her arena queue pops.

Toetoe: See? We're not so similar after all.

Mute: I'm just saying: With all of us, it's slice, stab, stab, stab harder, keep stabbing, and wait for our poisons and our bleeds to take care of business. Sure, I stab a little slower, you stab a little faster, and Hush's attacks are harder to master, but heck -- we even look basically the same when we're doing our thing. I just wish there was something -- I don't know what, but something -- to being a rogue that made us feel distinct, you know?

Toetoe: 'Keep, another Jack and Coke -- actually, make it a double. This is gonna be a long night. 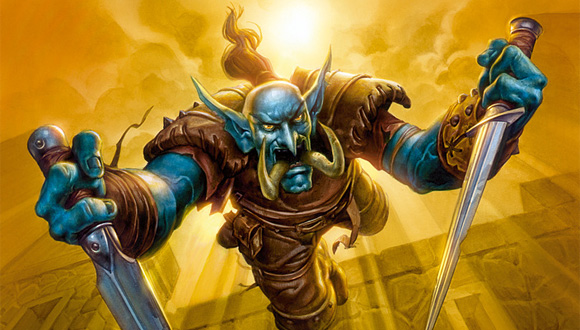 I've got a confession to make: When I started working on this week's column, it was going to focus heavily on the third of the three major questions about the rogue class I raised last month: "How will you give us more control over the damage we deal?" There were gonna be numbers, and bar graphs, and a disturbing amount of terminology (like "attacks per minute" and "passive vs. active damage" and maybe "prestidigitation"). Some of you may have actually started to suspect I knew a thing or two about theorycrafting. (You'd have been wrong.)

But a funny thing happened on the way to that column: I realized that all the numbers were beside the point. The problem with a request like "give us more control over our damage" is that it doesn't explain what the issue we're experiencing is. Is it that we believe our autoattacks and poisons make up too large a chunk of our murdering? (How many of us would even notice that's the case if they didn't see someone else writing about it?) Is it that we spend less time pushing buttons than we'd like, leaving our gameplay feeling sluggish and dull? Or is it that, when we do press those buttons, the result doesn't feel as good as we wish it did?

The sheer variety of opinions, ideas and complaints I've seen around this issue makes me feel that, although many of us have a sense that something is "off" about rogue gameplay -- particularly in end-game PvE (dungeons, raiding, scenarios, even Proving Grounds) -- we haven't gotten to the heart of the problem. We dance around it, grumbling miscellaneously, as though we were all sitting forlornly at a bar at the end of a long, hard day. But we keep missing it.

I'm out of room for the week, so next Wednesday (yes, I promise: no two-week wait for my next column), I'll explain in depth what I think that missing "something" is, and what I think should be done about it. In the meantime, I've got a request: As you guys continue to ponder the things you wish were different about our class, please think about why you feel that way before you 1) propose redesigning our spellbooks, talent trees and the like or 2) insult the game designers for their ineptitude and congratulate yourself on a job well done.

The rogue class won't be magically "fixed" if our Level-60 talents are altered, or if Rupture is redesigned, or if we get more traps to disarm in raids, or if Fan of Knives becomes available at Level 10. No single spell change, or set of changes, can accomplish that. It's also not our job to design the class; it's our hobby to play it.

For every criticism you have about rogues, for every idea you have about how to make the class better, ask yourself what the motivation is behind those thoughts -- what it is about your idea that will make rogues more fun for you personally. That's the kind of conversation I'm most interested in having. It may be the kind of conversation that the people who do design our class for a living are more interested in having, too.

Heck, I'll drink to that.

Sneak in every Wednesday or two for an early glance at rogues in the upcoming expansion, a look at the eight key things you should keep in mind when leveling your rogue -- and of course, the answer to why we'll always be the bad guys.
In this article: featured, rogue-complaints, rogue-theatre, rogues-pandaria, wow-rogue, wow-rogues
All products recommended by Engadget are selected by our editorial team, independent of our parent company. Some of our stories include affiliate links. If you buy something through one of these links, we may earn an affiliate commission.