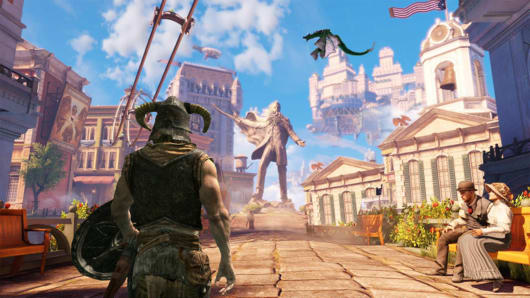 Bethesda is palling up with 2K Games on an Elder Scrolls/BioShock bundle again, this time for BioShock Infinite and Skyrim. It's not the only cross-pub bundle on the way; there's also one for Dishonored and Borderlands 2. Both bundles are priced $30 and are due to arrive on February 11.

It may seem a bit of an unusual union, but there's precedent: The two publishers teamed up on an "Award Winning Combo" bundle for Oblivion and the original BioShock back in 2009. We've reached out to Bethesda to find out more details, including which editions of the various games are being included.

Update: A Bethesda spokesperson told Joystiq each game is the base edition, with no DLC bundled in. Also, the bundles are on PS3 and Xbox 360, and for North America only.
Source: @ArkaneStudios, @BGS_Devs
In this article: 2k-games, bethesda, Bethesda-Softworks, gearbox, gearbox-software, Irrational-Games
All products recommended by Engadget are selected by our editorial team, independent of our parent company. Some of our stories include affiliate links. If you buy something through one of these links, we may earn an affiliate commission.