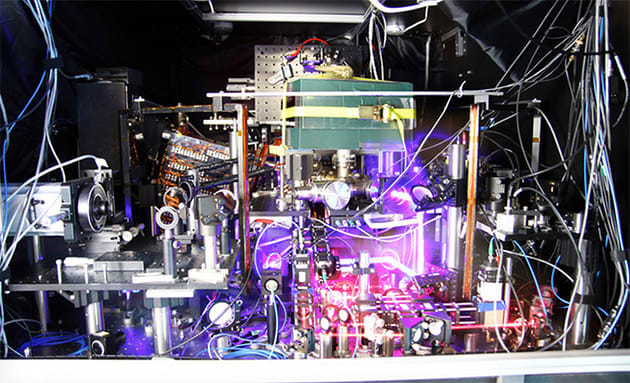 Most of us only pay attention to time when it's causing headaches, but the same can't be said of a team of researchers working out of the University of Colorado at Boulder. Led by National Institute of Standards and Technology fellow Jun Ye, they've crafted an atomic clock that can keep precise time for billions of years, a world record.

This hefty new timekeeper can tick off the seconds with the same unflinching regularity as the best of them, but it'll be about 5 billion years before it experiences its first temporal hiccup. For the morbidly curious, that means the clock will still be precise when the sun starts ballooning into a massive red giant. That may not sound like a huge deal now, but when our descendants start laying in escape routes to some more pleasant planets they'll be glad for that extra precision.

How does the thing work? Well, strontium atoms are held in "traps" formed by lasers, and researchers are able to track how often they oscillate by using that laser light to get them moving. It's hardly a new technique, but you can't argue with the results: The new clock is 50 percent more precise than the last record-setter, and Ye says that there are plenty more breakthroughs to come.

Via: The Verge
Source: NIST.gov
In this article: AtomicClock, NationalInstituteofStandardsandTechnology, opticallattice, strontium, UniversityofColorado
All products recommended by Engadget are selected by our editorial team, independent of our parent company. Some of our stories include affiliate links. If you buy something through one of these links, we may earn an affiliate commission.