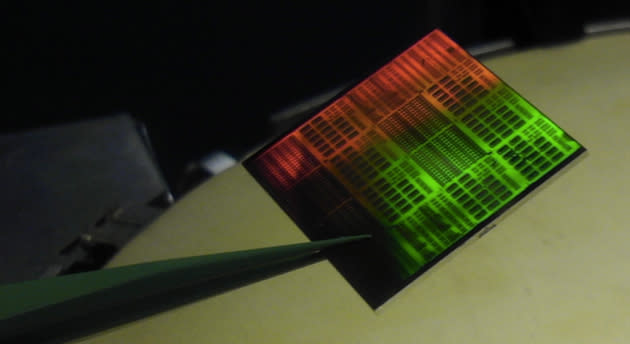 Chips with graphene inside are theoretically quicker than plain silicon designs, but they've been slow in practice; the manufacturing process often damages the graphene, stripping away its speed advantage. That won't be a big problem with IBM's prototype radio receiver, though. The company inserted graphene transistors into the new chip only after it finished assembling the mostly silicon design, keeping the more exotic material intact. The resulting integrated circuit is about 10,000 times more powerful than previous parts, IBM claims. The test unit hasn't done more than send a text message so far, but it could lead to future wireless radios that are both faster and consume less power. If you eventually get a graphene-powered smartphone with great data speeds and a long battery life, you'll know who to thank.

In this article: cellphone, chip, graphene, ibm, integratedcircuit, radio, receiver, science, wireless
All products recommended by Engadget are selected by our editorial team, independent of our parent company. Some of our stories include affiliate links. If you buy something through one of these links, we may earn an affiliate commission.