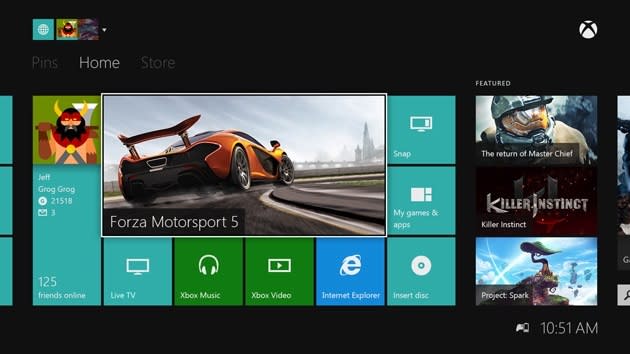 When the first component of Xbox One's spring update arrives on February 11th, it'll be a few weeks ahead of the first spring flowers sprouting. Like those flowers, much of what's contained in the February update is under the surface: Kinect voice recognition improvement, tools for developers and "stability and product updates to improve the customer experience" to name a few non-specific bulletpoints. What you'll actually care about is the stuff you'll see, which in this case is a battery meter for gamepads (visible on the dashboard) and a reorganized My Games & Apps section.

That first component is self-explanatory, but the latter piece requires some detail. First, you can actually see how much space you've got left on that 500GB HDD -- helpful! Second, the applications are being broken out from games, and can be more incrementally managed. "Now you can pick the order in which you want your content to load and we've added a boot progress indicator so you can better track updates while they load," Xbox Chief Product Officer Marc Whitten says in a blog post detailing the update. Additionally, February's update adds USB keyboard support. Sure, why not? There should also be some other bells and whistles in there, which Microsoft says we'll find out more about soon (er, uh, before next Tuesday).

Head below for more on the second half of the update, due in March.

The second piece of seasonal update arrives on March 4th, and it's got a fully revamped party system just in time for the launch of blockbuster game Titanfall (a multiplayer-focused experience). What exactly does that mean? We'll have to wait to find out, as Whitten's only offering "a new party and multiplayer system" as detail. And what of promised Twitch.tv streaming ahead of E3 this year? Microsoft's staying mum for now, but we'd be shocked if it didn't show up in the first major system update to Xbox One.

Regardless of the spring update, small and continuous updates to the Xbox One will still occur as time goes on. Whitten also says we'll hear "many" more announcements regarding the upcoming update -- here's hoping next time we find out HBO Go and Spotify are part of the big spring refresh.

In this article: dashboardupdate, hdpostcross, marcwhitten, microsoft, update, xboxone
All products recommended by Engadget are selected by our editorial team, independent of our parent company. Some of our stories include affiliate links. If you buy something through one of these links, we may earn an affiliate commission.