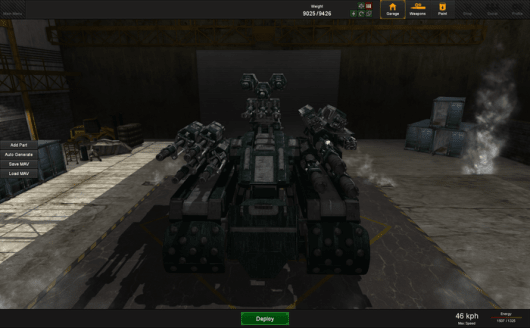 Indie-developed mech battle game MAV wants to teach us a valuable lesson: that the best walking tank is the one you build yourself. Inspired by games like Chromehounds, MAV (short for "Modular Assault Vehicle") is a mech battle game about creating and customizing the best rompin', stompin' robot war machine you can.

MAV developer Chad Mauldin is currently asking for $20,000 on Kickstarter, though the game already has its big metal feet off the ground, so to speak. The $20,000 is to bring on an artist so that Mauldin can focus on coding. Mauldin has already released several builds of the game for PC, and those who contribute $20 or more to the campaign get access to these and all future builds starting March 5, 2014, when the Kickstarter ends.

The MAV Kickstarter page stresses that the game isn't about sniping or quick kills, but rather strategic and planned combat, where locational damage and taking advantage of an enemy's structural weaknesses are key. Every module that makes up an assault vehicle in MAV has its own health and armor rating, and the pieces interact with one another. When a piece of your mech is destroyed, it takes with it any pieces that relied on it. See that enemy with seven guns attached to one arm? Just take out the shoulder and he'll find himself unarmed (pun intended).

At the time of writing, Mauldin is more than halfway to his funding goal, with 24 days left. Though he doesn't list any stretch goals, he does note that he'd like to "eventually" bring the game to people not on PC, "whether it be on Mac and Linux, or even PS4 and Xbox One."
[Image: Chad Mauldin]
Source: Kickstarter
In this article: chad-mauldin, indie, kickstarter, linux, mac, mav, microsoft, modular-assault-vehicle, pc, playstation, ps4, xbox-one
All products recommended by Engadget are selected by our editorial team, independent of our parent company. Some of our stories include affiliate links. If you buy something through one of these links, we may earn an affiliate commission.