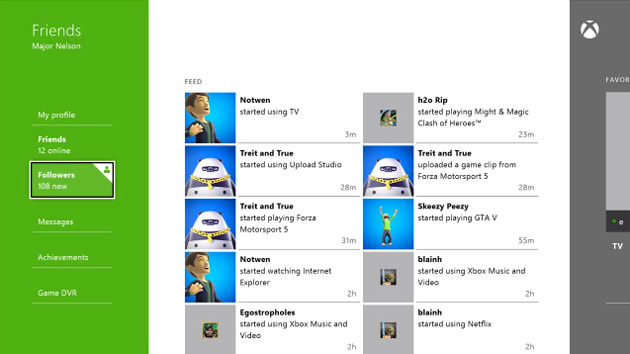 For better or worse, Microsoft is clearly aware that the Xbox One's party system and online multiplayer functionality are lacking. An update aimed at bringing parity between Xbox One's party system and the Xbox 360 arrives this March -- the second half of this spring's big XB1 update, the first of which will launch this week -- and it features some fairly run-of-the-mill alterations.

The headline feature, for instance? "Get to your friends list faster," which simply bumps the friends list to the main homepage within the Friends app (the current version is seen above). The rest of the list is along the same lines: Party chat will automatically engage when in a party; you'll be able to chat with people in games you're not playing; invites to party up can be sent from in-game menus; and a recent-players filter is being added to the Friends app as well. Longtime multiplayer gamers will no doubt recognize all this functionality as already available on Xbox 360; we're thankful it's coming back, but shouldn't this have been in the Xbox One at launch?

As previously promised, the multiplayer-focused update is set to arrive just ahead of Titanfall's March 11th launch. Should today's news not be too thrilling for you, it sounds like multiplayer isn't the only aspect of next month's update: Microsoft says it'll "continue to share more details in the days and weeks ahead."

Source: Microsoft
In this article: hdpostcross, microsoft, multiplayer, titanfall, xboxone
All products recommended by Engadget are selected by our editorial team, independent of our parent company. Some of our stories include affiliate links. If you buy something through one of these links, we may earn an affiliate commission.