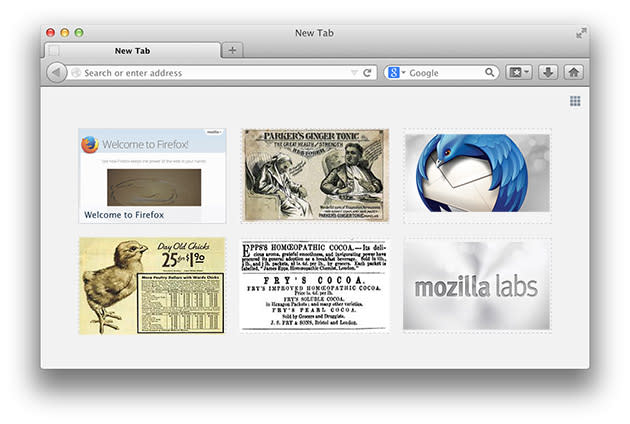 Advertisements? In my virgin tab page? It's more likely than you think, new Firefox user. That's because Mozilla will soon launch Directory Tiles, a program that'll ensure you see something other than blank squares the very first time you launch the browser. Instead, it'll populate those spaces with various Mozilla links and, more significantly, sponsored content. Those tiles will be clearly labeled as ads, however, and should go away after you've surfed for a bit. The change will help make Mozilla "more sustainable as a project," according to its blog, which sounds like a coded way of saying it'll generate some cash. That seems reasonable, considering that its competitors have Scrooge McDuck-like vaults of money to throw at their browsers.

In this article: Ads, DirectoryTiles, Firefox, Mozilla, Tiles
All products recommended by Engadget are selected by our editorial team, independent of our parent company. Some of our stories include affiliate links. If you buy something through one of these links, we may earn an affiliate commission.