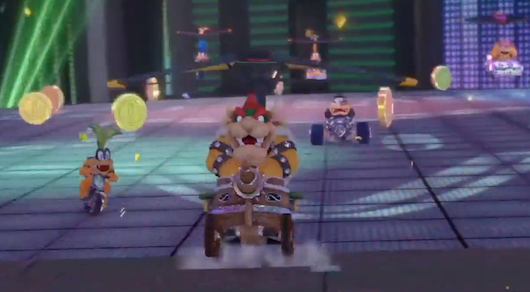 Welcome to Joystiq Weekly, a "too long; didn't read" of each week's biggest stories, reviews and original content. Each category's top story is introduced with a reactionary gif, because moving pictures aren't just for The Daily Prophet.
Did you see that the Koopalings are going to be new characters targets in Mario Kart 8? The Koopalings, the brats responsible for loads of deaths dealt to Mario and Luigi with lava, twirling hoops and rings of death from magic wands? Yup, we've got new rivals. You're annoying, Baby Mario, but you haven't stopped us from moving on to the next world of a Mario game before. Watch your back, Koopalings.

There's something about family-friendly, inclusive Nintendo games that bring our most competitive spirit. Have you ever calmly congratulated a friend after their star thievery earned them the title of Party Champion in Mario Party 2? Have you nodded in admiration of your opponent's strategy in Mario Kart Wii, right after they steal your victory with a red shell a few feet away from the finish line? We have a feeling your dialogue might have been more ... "spirited" than civil. We're not judging though - heck, we just threatened a bunch of baby turtles one graf above this!

Of course, a lot more happened this week beyond the Koopalings opening themselves up for a world of hurt. This week brought NPD data for January, a review of The Last of Us' "Left Behind" DLC and video previews for Titanfall and Evolve! There's lots more beyond that after the break though, so jump the break and dive into the biggest stories of the week!

[Image: Nintendo]
In this article: borderlands-2, evolve, indie, indies, Joystiq-Weekly, kickstarter, lightning-returns, lightning-returns-final-fantasy-xiii, mario-kart-8, nintendo, nintendo-direct, npd, super-smash-bros, the-last-of-us, titanfall, txk, vita-2000
All products recommended by Engadget are selected by our editorial team, independent of our parent company. Some of our stories include affiliate links. If you buy something through one of these links, we may earn an affiliate commission.