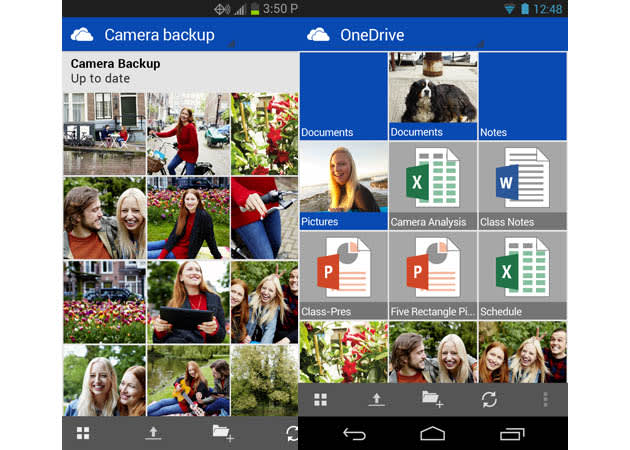 Nope, not SkyDrive -- OneDrive. In case you haven't heard, Microsoft's cloud storage service is going by a new name, and it's finally going into effect today; you should see in the upper-left corner the next time you log in. But that's not all that's new: the company also updated its Android app with automatic camera backups, so that any photos or video you take on your device will automatically be sent to OneDrive. If you recall, this is a feature you'll already find on the company's iOS app -- for whatever reason, it just took a bit longer to make its way to Android. As ever, you can opt to have OneDrive upload on WiFi only, ensuring you don't exceed your monthly data cap. You can also put limits on image sizes if you want to make the most of your 7GB of free storage space.

Additionally, the company introduced monthly storage plans, starting at $4.49 a month for 50GB and going up to $11.49 a month for 200GB. Simple math tells us that's more expensive than buying the same amount of storage on a yearly basis, but hey, some of you might be commitment phobes, and we get that. Lastly, you'll want to keep an eye on Microsoft's new OneDrive Twitter account today: the company will be giving away 100GB of free storage for a year, with freebies going to the first 100,000 people who log in at a designated time. The catch: Microsoft hasn't said yet what time folks will need to log into their accounts, so if you want a chance of winning, you'll just need to watch OneDrive's Twitter feed. Sneaky, but them's the breaks.

In this article: microsoft, onedrive, skydrive
All products recommended by Engadget are selected by our editorial team, independent of our parent company. Some of our stories include affiliate links. If you buy something through one of these links, we may earn an affiliate commission.