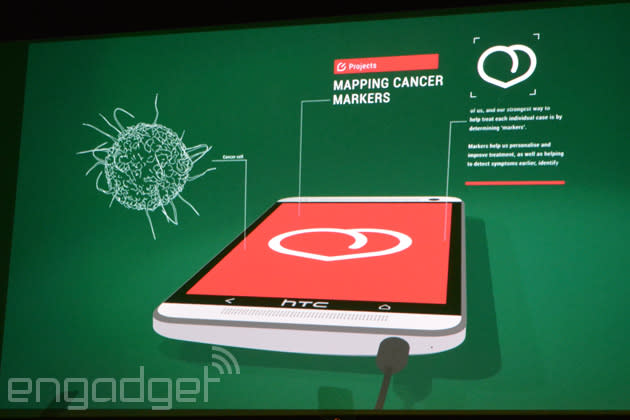 With smartphones packing so much processing power these days, HTC reckons we can combine them all to do some meaningful number crunching à la SETI@home and Folding@home. We're talking about curing diseases (AIDS, cancer, Alzheimer's and more) as well as searching for alien life. As such, the mobile company has teamed up with UC Berkeley's Dr. David Anderson, co-creator of SETI@home, for the HTC "Power To Give" initiative. To take part, you simply grab the app from Google Play, install it and it'll run in the background when your phone's being charged up plus connected to WiFi.

HTC claims that the combined power of 1 million Ones is almost just as good as a one-petaflop supercomputer, so the more the merrier -- including those from other brands. But for now, HTC will first offer its app's beta release to the HTC One family and the Butterfly series, and it'll gradually add more compatible Android devices over the next six months. Isn't it awesome that even Nokia phones can soon partake in this, too?

Update: The good folks at HTC have now published a couple of videos explaining this initiative. Check them out after the break.

In this article: app, BOINC, DavidAnderson, distributedcomputing, htc, mobilepostcross, mwc, mwc2014, powertogive, video
All products recommended by Engadget are selected by our editorial team, independent of our parent company. Some of our stories include affiliate links. If you buy something through one of these links, we may earn an affiliate commission.