Samsung's Galaxy A80 has a rotating triple camera and no notch 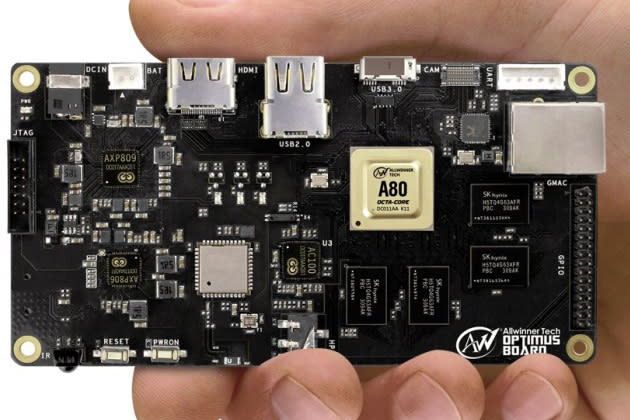 Samsung, MediaTek, Huawei and even Qualcomm are now in the octa-core SoC game, but there's always space for more. The latest member is China's Allwinner Technology, who's best known for making the chipsets inside many low-end devices. Like most of its competitors, Allwinner's UltraOcta A80 silicon (pictured above on a development board) uses ARM's big.LITTLE heterogeneous multi-processing design, meaning it can simultaneously run on all eight cores -- four low-power Cortex-A7 and four high-end Cortex-A15. The chip also features Imagination Technologies' 64-core PowerVR G6230 GPU, which promises to deliver "a twofold increase in graphics" performance when compared to Allwinner's previous flagship SoC, the A31 series.

We'll spare you from all the nitty-gritty, but you can learn more in the source links below. Expect to see the UltraOcta A80 in affordable devices "in the next few months."

In this article: A80, allwinner, big.little, chip, cortex-a15, cortex-a7, G6230, heterogeneous, HMP, imagination, ImaginationTechnologies, mobilepostcross, mwc, mwc2014, octa-core, PowerVR, PowerVRG6230, PowerVRSeries6, processor, series6, soc, UltraOctaA80
All products recommended by Engadget are selected by our editorial team, independent of our parent company. Some of our stories include affiliate links. If you buy something through one of these links, we may earn an affiliate commission.