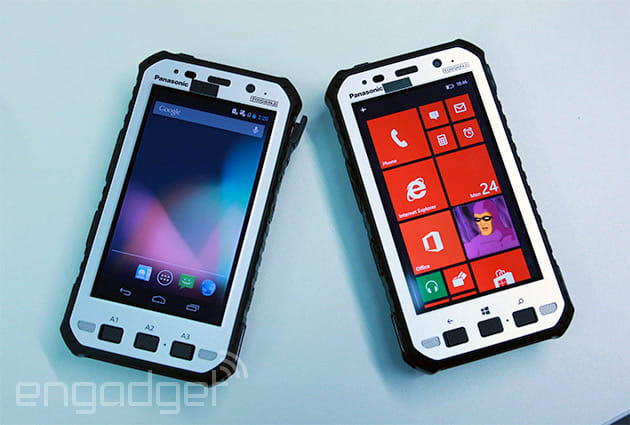 Panasonic may have bowed out of the consumer smartphone game, but gadgets for businesses are a completely different story. That's why the Japanese company came to Mobile World Congress with a new pair of rugged Toughpad smartphones in tow. You can't mistake them, despite their identical looks, because one runs Android 4.2.2 and the other has Windows Embedded 8 Handheld -- and we just got a chance to see what they're made of. The Toughpads are well over an inch thick, but the heft is valuable since it helps the duo resist dust, drops and liquid. Sadly, we didn't have a bucket of water to hurl the things into, and drops on the carpeted floor of Panasonic's press room weren't as satisfying as we'd hoped. These Toughpads are modular (if not as stylish as other concepts we've seen). Some of the components lodged in the Toughpads' backs can be unscrewed and swapped out completely, so folks who can't think of anything to do with a barcode scanner can kiss it goodbye.

The company may bristle at our use of the dreaded "S" word, preferring instead to call them tablets, but come now: If it looks like a smartphone, and makes calls like a smartphone, you're not fooling anyone. That said, both Toughpads sport the same slew of rubberized buttons, port flaps and 8-megapixel rear cameras. The internals aren't the same, though: The Windows Embedded version features a 2.3GHz quad-core Qualcomm Snapdragon 800 chip, while the Android model got stuck with a pokier 1.7GHz Snapdragon S4. Both devices felt snappy and responsive, and the 5-inch 720p screens were better than you'd expect considering these things are meant to take a beating.

The thing to remember here is that you're not going to waltz into a big-box store and see one of these on the shelf. These Toughpads are designed for being tossed around warehouses and construction sites, not in and out of your skinny jeans. The prospective price tag just drives that point home: They'll run you about 130,000 yen ($1,300) when they officially launch later this year.

In this article: android, hands-on, mobilepostcross, mwc2014, panasonic, rugged, ruggedized, smartphone, toughpad, video, windows8
All products recommended by Engadget are selected by our editorial team, independent of our parent company. Some of our stories include affiliate links. If you buy something through one of these links, we may earn an affiliate commission.