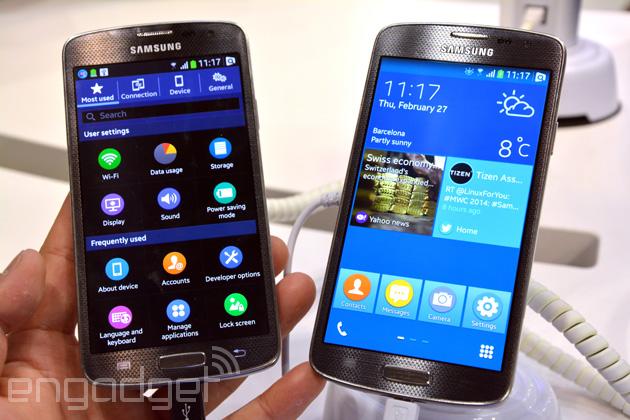 Samsung's device lineup may still be heavily dominated by Android, but change is in the air. Tizen, the open-source OS it jointly develops with Intel, powers the company's three new Gear wearables, and smartphones are coming later this year. We got the chance to play with Samsung's latest Tizen phone prototype, which runs a customized build (version 2.2.1) of the platform, allowing us to see what's changed since the last time we saw a Samsung developer handset. While there's still plenty of similarities between the prototype and what we've seen in the past, Samsung's worked to incorporate parts of its Android design language, particularly in the apps drawer, notification tray and homescreen widgets. Not only do they look better, each of the elements are more feature rich than before, offering users greater control over the device and making it feel like a complete platform. The company insists the platform isn't designed to replace Android, affirming that it forms part of its "multi-OS strategy," but given its recent wearable overhaul, we'll never say never. Check out the hands-on video below to see what a Samsung mobile future without Google could possibly look like.

Sharif Sakr and Richard Lai contributed to this report.

In this article: android, hands-on, mobilepostcross, mwc2014, os, samsung, tizen, video
All products recommended by Engadget are selected by our editorial team, independent of our parent company. Some of our stories include affiliate links. If you buy something through one of these links, we may earn an affiliate commission.