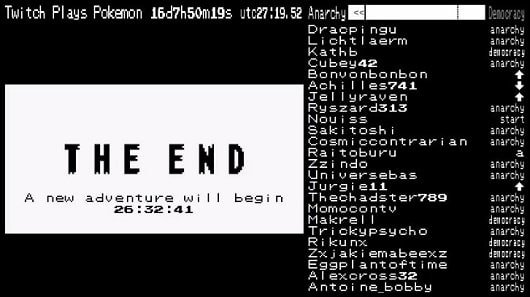 Twitch has announced the final statistics for cultural phenomenon Twitch Plays Pokemon, which came to a dramatic close earlier today. And while only one pokemon trainer can be the very best, more than 1.1 million people tried. The actual number of TPP "players" - as in, those who entered commands in the game's chat - totaled 1,165,140, according to the Twitch official blog. As if that weren't quite ridiculous enough, here's some more rare candy to chew on: For reference, the total number of views is more than twice that of Shanghai, the city with the highest recorded population in the world. Granted those aren't all unique views, but that's still a freaking lot of views.

Unofficial stats have also been collected by the community, for those who'd like to know just when each magical moment transpired. According to one account, it took Twitch Plays Pokemon 22 tries to beat the Elite Four. It only took them two tries to beat Blue, the game's archenemy. Two!

The weight of TPP cannot be overstated - aside from the various memes and religions it's created, there's even a petition to have the US government officially recognize March 1 as Helix Day. Praise Helix.
[Image: The Pokemon Company]
Source: Twitch, Google
In this article: bird-jesus, helix-day, pc, pokemon, pokemon-red, praise-helix, stats, twitch, twitch-plays-pokemon
All products recommended by Engadget are selected by our editorial team, independent of our parent company. Some of our stories include affiliate links. If you buy something through one of these links, we may earn an affiliate commission.