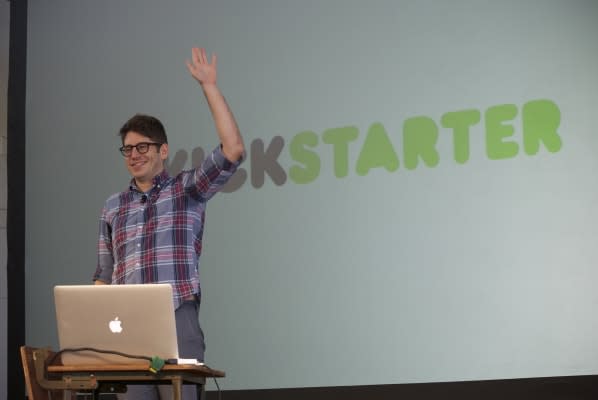 Crowdfunding has been a boon to companies that are bringing some of the most exciting and innovative devices to market. But sometimes things go wrong. Last March, the first of a two-part Switched On discussed some of the foibles about crowdfunding in the wake of Kickstarter proclaiming that it was not a store. The column highlighted three products, two of which (the Syre Bluetooth iPod nano watchband and the Jorno folding keyboard) had seen long delays, but still seemed to have hope of shipping.

Nearly a year later, neither has. And there is no telling when or if either will. To the credit of Scott Starrett, the creator of the Jorno, he has kept posting updates about his product, although perhaps not as frequently as backers would like. The last one came earlier this month and contained auspicious news about several critical problems with the prototype being fixed. The Syre update page, on the other hand, has gone dark; the last update was in August 2013. A genuine Apple watch is likely to appear before the Syre.

When a company files its S-1 form to go public, it must include a section called Risk Factors...

The second part of that two-part column discussed two new sites that were trying to build in more protection for consumers. Unfortunately, though, the flow of steady projects at Christie Street failed to materialize. And so we are back to Kickstarter. It's attempted to more accurately represent the chance that contributions might not result in expected outcomes by requiring a Risks and Challenges section on each campaign page. That section acts as a bit of a reality check to the ebullience of the rest of the campaign page.

But in this case, the inmates are running the asylum.

The level of responsibility that a reward-based crowdfunding campaign has to its backers may not be as high as that of a company seeking to raise equity. Nonetheless, it helps to look at examples from the latter world. When a company files its S-1 form to go public, it must include a section called Risk Factors that gives potential investors an idea of what might go wrong. A look at the sections from Facebook's and Twitter's filings reveals warnings that are typical of the genre -- multiple pages designed to sound as though they were authored by Rachel Dratch's Debbie Downer. The company might experience harm from competition, lawsuits, users leaving, innovation failing, personnel leaving, financial losses, unproven business models, a limited history, ad market downturns, internet service disruptions, mobile ecosystem tyranny, spam, mismanagement, government regulation, brand damage and on and on -- this from companies that have been operating high-growth businesses and serving millions of users for years.

Let's contrast that to the Risks and Challenges section of the Auris Wily project.

"We have an amazing team with a lot of experience in making things and delivering them. We have de-risked this campaign by building a few functional prototypes and testing all of its key technologies.

"We have already established contracts with an experienced manufacturer and are ready to begin manufacturing the first run of auris wily: The Smarter Speaker. What, me worry? Backers of the Wily were lucky.

"Our promise to deliver on schedule will be challenged many times as we go through manufacturing, certifications and logistics. However we will do our best to minimize the impact and keep our backers in the loop."

What, me worry? Backers of the Wily were lucky. The company's falling out with its manufacturer happened before the completion of the campaign where the sponsoring company would be on the hook for delivering the product. In that case, we would certainly have seen the product miss its expected availability in the coming months and crossed our fingers that it did not turn into another Syre. Fortunately for Auris and its backers, it will likely return with another campaign as many canceled campaigns do.

The next Switched On will discuss some of the risks that affect virtually all new hardware endeavors and showcase one campaign that is laying out at least a few potential problems for backers.

Ross Rubin is principal analyst at Reticle Research, a technology, media and telecom advisory firm, and founder of Backerjack, which covers crowdfunded product innovation. He blogs at Techspressive.

In this article: auris wily, column, crowdfunding, kickstarter, rossrubin, switchedon
All products recommended by Engadget are selected by our editorial team, independent of our parent company. Some of our stories include affiliate links. If you buy something through one of these links, we may earn an affiliate commission.