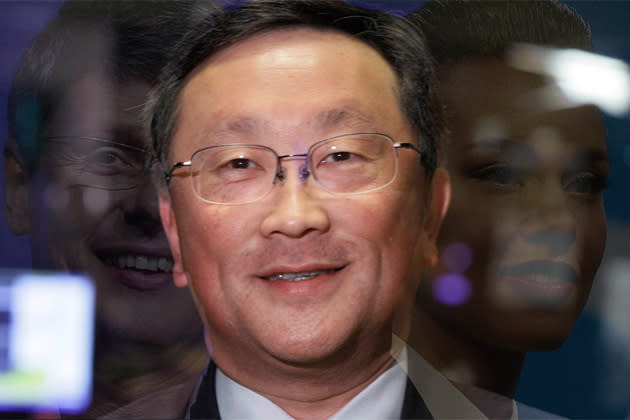 To say that BlackBerry's had it tough these past few years would be putting it mildly, if not too delicately for a company emerging from a period of willful ignorance. The Waterloo-based outfit, formerly known as Research in Motion, played an embarrassing game of catch-up in the mobile space it once dominated. An uphill rehabilitation that saw it acquire QNX to build a new operating system, release a half-baked tablet, rebrand as BlackBerry in search of a new identity and, tellingly, hire Alicia Keys as a creative figurehead.

And none of it mattered -- not even the forced infusion of Ms. Keys' questionable zeitgeist-y influence. The BlackBerry of today has so far failed to resurrect sufficient interest in its fledgling mobile platform and devices, leading to the ouster of former CEO Thorsten Heins, the very recent installation of John Chen and a redoubled focus on the enterprise set that once was core to the company's business. So why does the company still seem to be engaged in an internal tug-of-war over its identity? I had a chance to speak with Gary Klassen, longtime BlackBerry employee and principal architect, here at SXSW in the hopes he could shed some light on what the Blackberry of today stands for and where it's going.

In the aftermath of the company's most recent earnings report, Chen made it clear that prosumers are the company's key to recouping profitability. And yet, in practice, the strategy comes across as schizophrenic: BBM for the young consumer demo, BB10 for enterprise and the Foxconn-produced Z3 all-touch device for emerging markets. This fuzzy focus flies directly in the face of Chen's stated aim on the enterprise market.

Klassen, who moved to Sweden soon after the launch of BB10, currently works alongside the team responsible for foresight, design and UI framework -- the concept work that'll fuel BlackBerry's future business. Yet, the driver of this innovation isn't the business customer -- quite the opposite -- it's the youth demo that Klassen looks to for clues on how to evolve the BlackBerry 10 platform. "I watch the next generation ... how they are using these technologies," he said. "They know them. They understand them. They leverage them in ways that we never could have imagined."

In the aftermath of the company's most recent earnings report, Chen made it clear that prosumers are the company's key to recouping profitability.

BBM is perhaps the best example of this. The messaging service, once BlackBerry's linchpin, has now been freed from the walled ecosystem it was withering under to court potential users on Android, iOS and, soon, Windows Phone. It's an effort Klassen personally framed as "the realization of a dream," though many see the move as coming too late to reverse BlackBerry's fortunes and stave off rivals like Google's Hangouts or Facebook's WhatsApp. And its rollout wasn't without significant stumbles. I asked Klassen to elaborate on just what went wrong there... to explain why the company seemed to be so caught off guard by the initial user load that it delayed the service even further. Klassen, predictably, placed much of the blame on "an early beta that got out and went viral," but wouldn't comment further on the server-side difficulties that plagued the experience.

And let's not forget about the Facebook Messenger-like "stickers" -- those paid content packs of messaging icons users can share over BBM. That copycat move not only rings hollow among the fickle youth demo it's attempting to endear, but it also betrays a lack of focus for the company. As Klassen explained to me, "We realized the impact of mobile messaging has been quite stunning. So, we're looking for ways to expand that to better serve the customer." By that line of reasoning, then, the introduction of paid in-app purchases runs counter to the mass BBM adoption BlackBerry's hoping to spur across platforms. There's just no good reason for users to abandon free, rival services that offer the same perks at no additional cost. If anything, it's actually all the more reason to avoid BBM.

The concept work coming out of Sweden isn't all that more encouraging either. Klassen offered up BlackBerry Express as an example of the work his team's been doing to make users "more effective ... and better at communicating." Express, a feature that only works with BB10.2, is similar to Google's Quickoffice app for Android and iOS in that it lets users create presentations directly from a mobile device. It's a feature that has a strong whiff of prosumer all over it, not the young consumer demo supposedly informing the team's process. It's also a pride point for Klassen. "I love the story that this tells ... BlackBerry Express came from a pain point we've all experienced," he said. "The feedback from Express has been stunning."

There's just no good reason for users to abandon free, rival services that offer the same perks at no additional cost.

The other proof Klassen offered up for how BlackBerry's keeping it moving (that's the slogan it embraced for BB10's reveal) is Tilt. Originally unveiled as a concept by Klassen's team at a developer event in Asia last fall, the feature, which uses the phone's gyroscope to display notification previews, was then handed off to third-party developers. Why? Klassen explained, "It used to be that we delivered these concepts primarily on our own. But we're now able to leverage the third-party development community to be able to deliver those as well ... [Tilt] is something we realized that our third-party development community would be better able to act on than we could." Klassen also added that Indian developers were the first to run with the idea, owing to that nation's reputation as a "mobile-first community."

Fair enough, but it does seem like a missed internal opportunity on BlackBerry's part, especially if prosumers are so core to the company's current business plan. Tilt is a reimagined version of the Moto X's Active Display, a feature that's integral to that device's identity. Certainly, BlackBerry would benefit from baking this directly into a future update of the BB10 OS, giving power users a less involved means of natively keeping up with the constant barrage of emails and messages at a glance. But, according to Klassen, it doesn't seem to be in the cards. "It's not limited to either/or, but there's a real power to being able to deliver things to users via the applications-development platform," he said. One could also argue there's a real power to making your floundering mobile platform stand out from the pack with unique, native features.

Klassen is aware BlackBerry's made some grave missteps, but won't make any apologies for it. "Moving forward; it's a tricky thing," he conceded. "We're trying things that are new." If that's indeed the case, then BlackBerry's going to need more than apps for presentations, stickers for chat and notification previews.

In this article: blackberry, blackberry 10, blackberry10, editorial, GaryKlassen, interview, mobilepostcross, SXSW, SXSW2014
All products recommended by Engadget are selected by our editorial team, independent of our parent company. Some of our stories include affiliate links. If you buy something through one of these links, we may earn an affiliate commission.