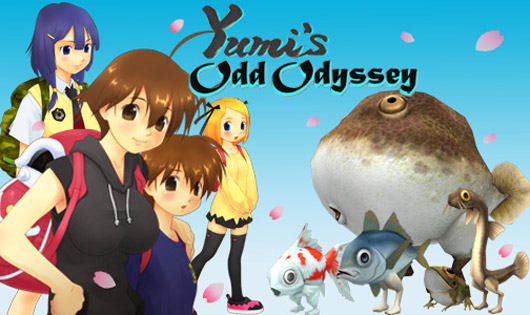 Released in Japan last year (as Sayonara Umihara Kawase), Yumi's Odd Odyssey is part of a long-running series that, to date, has never seen a Western release. The game equips players with an elastic fishing line, which can be attached to walls, floors, and ceilings in order to swing to faraway platforms, Bionic Commando-style. You'll also need to keep an eye out for wandering koi, eels, and other undersea critters, who have grown to monstrous size and sprouted legs in their pursuit of delicious human flesh.

Yumi's Odd Odyssey was initially announced as a localized port of a PSP entry in the Umihara Kawase series way back in 2008, though the title was abandoned in the years since and reassigned to next week's 3DS release. Yumi's Odd Odyssey will be priced at $29.99 when it premieres on March 20.


[Image: Natsume]
Via: Tiny Cartridge
Source: @Natsume_Inc
In this article: 3ds, agatsuma-entertainment, eshop, natsume, nintendo, release-date, sayonara-umihara-kawase, yumis-odd-odyssey
All products recommended by Engadget are selected by our editorial team, independent of our parent company. Some of our stories include affiliate links. If you buy something through one of these links, we may earn an affiliate commission.