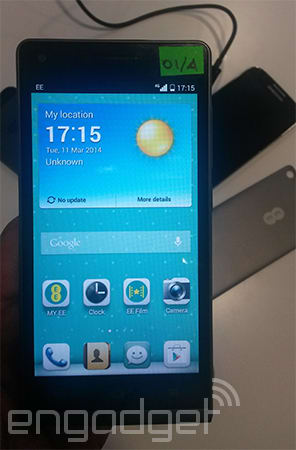 We assumed Vodafone would be the first UK network to launch an own-brand LTE handset when a US regulatory filing, of all things, hinted as such. Nothing's come of that as yet, but it looks instead like competitor EE's going to give it a shot with the device you see above. Details about the handset itself are scarce, although we know it'll be Cat 4 and thus take advantage of the theoretical max speeds available on the operator's "double-speed" plans. From the picture, though, we can see a moderately EE-themed Android skin, three standard soft keys below the display, and what appears to be a polycarbonate band on the bottom edge. Oh, and the silvery back plate with EE logo over to the right.

We believe the phone will be priced below the Alcatel One Touch Idol S as the network's lowest-cost handset (the Idol S is £130 on pay-as-you-go or from £19 per month on contract currently), but have significantly better specs than the current entry-level offering. EE declined to "comment on rumor and speculation," but we're allegedly a good few months from its official release, so still some way from knowing exactly how competitive the own-brand smartphone might be.

In this article: android, ee, mobilepostcross, odm, smartphone
All products recommended by Engadget are selected by our editorial team, independent of our parent company. Some of our stories include affiliate links. If you buy something through one of these links, we may earn an affiliate commission.