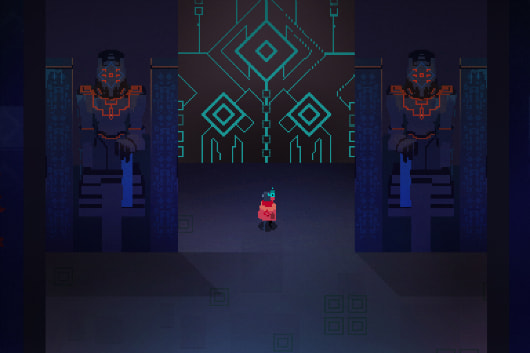 Hyper Light Drifter's combat mode is a solo or co-op evil-beast explosion – it begins in a training room lined with dummy targets, and a seafoam platform that recharges your magic. A door etched in rune-like symbols waits at the end of the room. Behind it, when you're ready, lies an arena filled with creatures bent on your destruction.

First, the training room allows you to play with mechanics: Plugged into a MacBook Air, playing with an Xbox 360 controller, press the right bumper to see a circle of weapons and map the ones you want to the Y or B buttons. These weapons include an enemy-seeking mine ball, a shotgun that shoots in a diamond formation, a boomerang, and a close-up attack that embeds a fucshia crystal in an enemy, which you then detonate into huge crystal splinters covering the surrounding area. These attacks drain magic.

The A button is a (very useful) dash, and X is a sword slash. Left bumper displays magic and health bars, and your weapons.

Unfortunately, there's no button to halt the flow of angry, violent creatures that swarm you once you open that door. Hyper Light Drifter is local co-op only, and I took combat mode for a spin with designer and techno-wizard Teddy Diefenbach, and Heart Machine founder Alex Preston looking on. It's entertaining enough to test out all of the weapons in the tutorial area, with that stone available to replenish your magic stores indefinitely. When we approach the door and it rises, grinding up the cavern wall, I feel ready.

All of the beasts are dangerous and potentially deadly, even the grunty, hunchback creatures that spew out first. I slash my way through a few of those before remembering my dash and breaking away. I have a rifle, but it doesn't do me much good; it's the game's take on sniping, and it emits a thin beam that you hold down until the character flashes, and you let the shot fly. If it hits something, the rifle is assured, instant death. But, the margin of error is high with the thin beam alone, and that's not accounting for the charge time. It's a good weapon, if you can use it. Or if you get lucky.

The diamond shotgun, on the other hand, is useful against crowds, though it takes more than one shot to bring down an enemy. The boomerang is similarly strong against crowds, as is the roly poly mine that follows foes before it explodes, and the standard grenade. Both of the bombs damage friendly characters and your own avatar, and all of these weapons drain magic rapidly. The sword is reliable against grunts, so it's useful to save magic weapons for larger enemies.

The biggest foe I faced was a minotaur-esque creature, taller and wider than the grunts, whose special attack was jumping so high he disappeared from the screen and then smashed down on the battlefield, attempting to squish me or my partner. The minotaur also squashes enemy characters, so he's not all bad.

Some enemies drop squares of magic to recharge your stores, but there are just four points of extra health on the map, one in each corner. When either character gets close to death, the entire screen starts fading to black, bleeding in around the edges. It's possible to see how much health you have exactly with a quick press of the left bumper, but it's difficult to concentrate on that extra move while furiously battling hordes of beasties. The encroaching darkness is a clever "uh oh" system.

On our third and final playthrough, Diefenbach suggested we stick together to take down foes as a team. It was a great suggestion and it worked well for roughly 12 seconds, whereupon I remembered the dash button, forgot his advice and began running around the map like a madwoman, slashing my sword and shoving crystals into grunts. Every now and then I would remember the plan and try to stay close Diefenbach's avatar, but I was a lost cause. His health drained, and mine ran out with him attempting to lead me to a square of health. We finished that round in two minutes and with 30 kills on the counter at the top of the screen. It felt good.

I didn't play the campaign, but Preston, the lead designer, described it as a mix of combat and exploration, with a heavy emphasis on narrative.

"Story is pretty paramount for us," he said. "I think good story in games is a rarity, so it's something that we're concentrating pretty heavily on."

Hyper Light Drifter is the product of a wildly over-funded Kickstarter campaign, raising $645,158 of a $27,000 goal in October 2013. Preston said he was surprised by the campaign's success, calling it "fantastic."

The game hasn't altered much from its crowd-funding presentation, Preston said:

"I don't think we made any promises we couldn't keep anyway." The stretch goals, for example, are in there: The team expanded specific areas as it promised, added a challenge mode as promised, and it's coming to a ton of platforms as promised. Diefenbach himself – the addition of another team member – was a stretch goal. "The only thing is, we need a good amount of time to do all of these things. We have the budget and the talent; we just need the time to do it," he said.

Hyper Light Drifter is in development for PC first, and then it'll hit PS4, Vita, Wii U, Ouya and Xbox One. The team hasn't set a firm release date, but Preston tentatively notes a target window of late 2014 to early 2015.
In this article: gdc-2014, heart-machine, hyper-light-drifter, Indie, microsoft, nintendo, pc, playstation, playstation-vita, ps4, vita, wii-u, xbox-one
All products recommended by Engadget are selected by our editorial team, independent of our parent company. Some of our stories include affiliate links. If you buy something through one of these links, we may earn an affiliate commission.