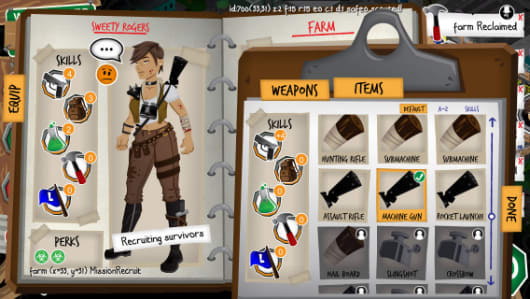 You're the leader of a group of survivors attempting to rekindle normal life in a barricaded, devastated city. Humanity has split into 12 factions; they're not exactly warring with each other, but they don't all get along. There are hippie Luddites, priest bikers, anti-male feminists and a group of LAN partiers, to name a few.

Every time you play, you get a random selection of a few factions, and in order to create a peaceful society, you must strike a balance among all of their opposing viewpoints. If you do a bad job, your factions can rise up and start a "true democracy," pushing you out of a decision-making position entirely. It is possible to build a city of peace, but it's difficult, creator Sarah Northway told Joystiq at GDC.

"It depends on what the factions are," Northway said. "There is a cannibal faction, and if you ban cannibalism and say that's absolutely not going to happen, they'll get angry. And then there's other factions, that if you embrace cannibalism, they get angry .... They'll just come to you, month after month, and say, 'So, your'e still eating people, eh?'"

Yes, cannibalism is a valid option in Rebuild: Gangs of Deadsville. But everything has consequences, and eating people induces the effects of Kuru, a neurological disease caused by cannibalism, in your citizens.

"You can just go full-on cannibalism," Northway said. "The devout people do not like cannibalism and it kind of makes your people a little crazy, too. There are side effects. They giggle a lot; that's part of the disease."

Rebuild: Gangs of Deadsville is a 4X strategy game with randomly generated story and an emphasis on player choice. It already has a novel's worth of text – around 100,000 words or a 300-page book – and the main campaign isn't even written yet. That's just the procedurally generated, day-to-day scenarios that pop up throughout the game.

"You have to really worry about your people," Northway said. "You end up having your favorite guys on missions and doing whatever, but you really build a story of what happened in your city through your actions. There's a huge amount of dialogue .... There are like little choose-your-own-adventure sequences every time you send someone off to scavenge for food, or to drive off the zombies, or to trade with some other bizarre faction in this post-apocalyptic city. And every time that happens, you get a little choose-your-own-adventure snippet, some kind of decision you have to make, and a lot of it is like, you have to pick between your survivor being in danger versus getting more food. You're making a lot of decisions that put people at risk in one way or another. You have to choose between medicine or food: Which one are you going to need more?"

Northway has help with the writing from an old friend from high school, programmer and DM Stephen Gray. Also on board, thanks to a successful Kickstarter campaign in October, are artists Adam Meyer and Sara Gross. Rebuild: Gangs of Deadsville is due out on Steam Early Access in a month or two – Northway already secured a spot on Steam, thanks in part to her previous work on Incredipede.

The PC and Mac version is technically a sequel to her previous mobile game, Rebuild 2, but Northway said the new version contains so much more that it's in a separate league. The mobile version was mostly strategy and fort-defense, and Gangs of Deadsville definitely includes the ever-encroaching wall of zombies from Rebuild 2, but it also adds heaps of story, choices and randomly generated sequences.

"This is the sequel to a mobile game that came out in 2011, but I feel like this isn't even a sequel – it's real and full," she said. "The mobile game was something I just kind of pushed out the door and it did very well. This is the Steam-release, full version of it."

Northway is already preparing for the temptations of Early Access – other developers have told her that they feel the need to add more to their games once the betas hit Steam. Plus, Northway predicts she'll want to keep players involved by consistently adding interesting content, but this will largely be a time for bug-fixing, which isn't very engaging, she said:

"This month, bug fixes. Next month, bug fixes. So I'm going to be very tempted to throw in a few extra items. I have a huge list of stuff that's not going in right now. One of the things that everyone really wants is seasons because it was one of the stretch goals I didn't make."

Northway is confident she'll be able to fulfill all of her Kickstarter promises (and maybe even some extra goodies, apparently). The alpha for Kickstarter backers has been live since November, but it doesn't yet include the campaign mode planned for the beta on Steam Early Access.

"There is actually a 'winning' to the game," Northway said. "It surprises me still that people are playing it all the way through because it's so unbalanced right now. But they are .... At the ending, you have a choice basically between allying with of all the factions or destroying them.

"You can make peace with the whole world .... Right now it might be impossible. I'm not quite sure – but that's only because the game is unbalanced. It might be."

For a fictional zombie apocalypse game, that certainly sounds a lot like real life.
In this article: early-access, gdc-2014, Indie, kickstarter, rebuild, rebuild-gangs-of-deadsville, sarah-northway, STEAM, steam-early-access
All products recommended by Engadget are selected by our editorial team, independent of our parent company. Some of our stories include affiliate links. If you buy something through one of these links, we may earn an affiliate commission.