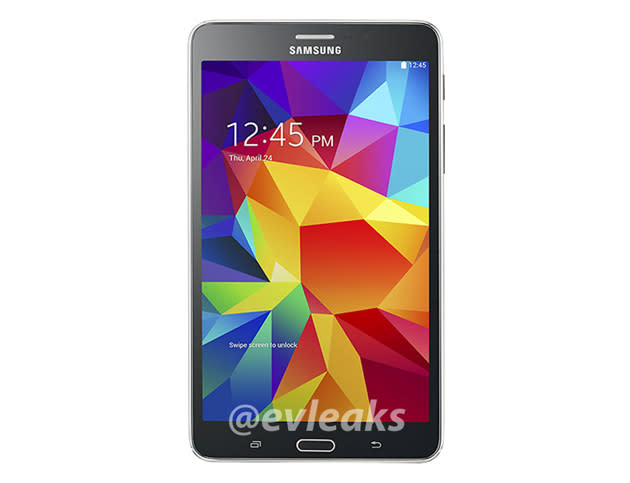 We've been hearing scraps of information about Samsung's next batch of Galaxy Tabs since February, but now we have something that helps us piece them all together: An FCC filing for what looks to be the 10-incher, with the model number "SM-T805." The official paperwork doesn't reveal much, but the same model has also appeared on internal Samsung documents that suggest it possesses a 2,560 x 1,600 display -- which would be a huge upgrade over the existing Tab 3 10.1. Smaller Tab 4 models have also leaked elsewhere, with a press render of the 7-inch version (shown above, courtesy of @evleaks) showing thinner bezels than the current Tab 3 7.0, presumably resulting in a cheaper version of the highly portable (and generally very good) Tab Pro 8.4. We could be due for an official launch event pretty soon, especially with the press renders showing a date of April 24th, so stay tuned for more numerical branding fatigue.

In this article: fcc, galaxytab, galaxytab4, mobilepostcross, samsung, tab4, uaprof
All products recommended by Engadget are selected by our editorial team, independent of our parent company. Some of our stories include affiliate links. If you buy something through one of these links, we may earn an affiliate commission.