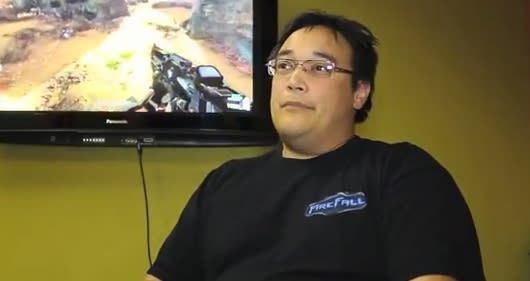 If you wondered what was going on behind the scenes of Red 5 Studios turbulent past year, then a new exposé on Game Front might illuminate you.

Anonymous former employees of the Firefall studio allegedly came forward to spill the beans about mass layoffs, questionable decisions, and ex-CEO Mark Kern's erratic behavior. One person said that Kern's constantly shifting decisions caused severe stress on the team: "Months of work would be thrown out simply because he would change his mind, or he would have another 'revolutionary' idea."

Another anonymous ex-staffer said that Kern was worse than that: "When he did get involved in the production of the game itself he was simply destructive. He would swoop in one afternoon and berate a series of features several teams had spent months on, declaring they begin again and LISTEN to what he told them to do. He'd be back in a few days to see if it was done. This crushed morale, and forced people into spontaneous, isolated crunch mode. He would shout and scream his perspectives."

[Thanks to Dengar for the tip! Part three of the expose is now live as well.]
Source: The troubled history of Firefall pt. 1, pt. 2
Coverage: Firefall
In this article: expose, f2p, firefall, fps, free-to-play, mark-kern, mmo-shooter, pvp, red-5, red-5-studios, sci-fi, shooter, third-person-shooter, war
All products recommended by Engadget are selected by our editorial team, independent of our parent company. Some of our stories include affiliate links. If you buy something through one of these links, we may earn an affiliate commission.