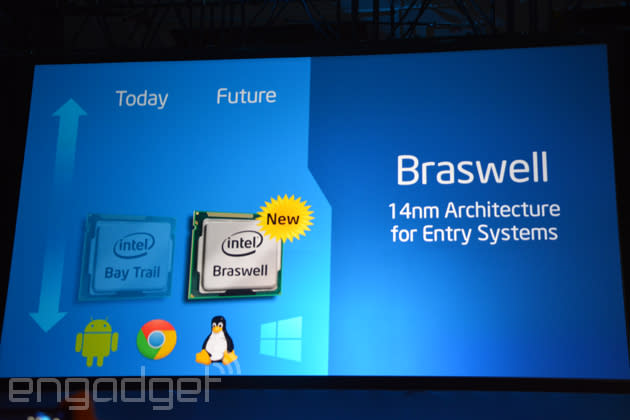 At IDF Shenzhen today, Intel briefly announced the 14nm successor to its budget 22nm Bay Trail processors. Dubbed Braswell, this new SoC architecture is mainly aimed at the likes of affordable Chrome OS and Android devices. It will also complement the higher-end Broadwell announced last September (and pictured after the break), though there's no word on availability for these two 14nm, 64-bit lines -- last we heard was that Broadwell's production had been delayed, with shipment still on track for the second half of this year. Fanless Core i7 systems just can't come any sooner. In this article: 14nm, 64-bit, braswell, broadwell, idf2014, intel, processor, shenzhen, soc
All products recommended by Engadget are selected by our editorial team, independent of our parent company. Some of our stories include affiliate links. If you buy something through one of these links, we may earn an affiliate commission.