Nokia Lumia 630 review: An affordable phone you can live without 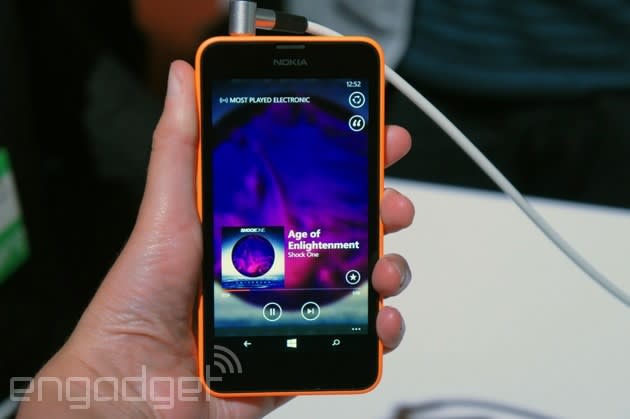 Nokia may not be an official part of Microsoft yet -- that should finally happen later this month, if you ask either company -- but that doesn't stop the phone maker from cranking out more devices at the software giant's developer conference. This morning at Build, Stephen Elop announced three new Lumia devices, although two of them are about as close to twins as you can possibly get: the Lumia 630, which is a 3G device that comes in single- and dual-SIM flavors, and the 635, which adds LTE. Both are sub-$200 smartphones aimed squarely at both emerging markets and anyone else who just wants a Windows Phone 8.1 device without spending a lot of money in the process.

At 4.5 inches, the pair of devices hit a sweet spot in display size, but its 854 x 480 FWVGA resolution isn't going to bedazzle. It's an inexpensive phone, however, so it's not horrible given what you're paying for. The handsets aren't necessarily designed from a premium perspective, but just like the 620 and 625 before them, these phones are colorful and offer interchangeable shells, which make them a lot more personable and customizable. In addition to the standard black and white hues, you'll be able to choose from green, orange and yellow (all bright).

When we played with the new devices, we saw two different types of covers. One of the options is matte, while the other is a two-toned option that is essentially an inverted version of the Lumia 620's cover. (Update: the matte covers are actually available for the 630, while the two-toned covers are specifically sold on the 635; that said, you can still easily change them around.) They're easy to swap and they add an element of fun to the phones. It's 9.2mm thick and has blunt edges that slant slightly, and this actually works in the handset's favor -- sure, it's not the thinnest device on the market, but it's very comfortable and easy to hold.

Thanks to this morning's update to Windows Phone, the Lumia 630 comes with a whole bunch of firsts for a Windows Phone: the inaugural dual-SIM device, the first we've seen with virtual soft keys and the first without a physical shutter button on the right-hand side. If you're going to be using the 5MP rear camera on a regular basis, you'll at least be able to add the camera into the action center as a quick-access shortcut. You'll also be able to take advantage of Cortana, the new virtual assistant on Windows Phone 8.1, as well as the Action Center and new keyboard with swipe gestures.

Another interesting feature on the 630 and 635 is SensorCore, which involves low-power health monitoring. Essentially, SensorCore can keep an eye on how many steps you've taken, miles you've walked and calories burned, and it logs the information into the Bing Health and Fitness app. Nokia will also release the SDK so developers can take advantage of the phone's new capability.

It comes with a Snapdragon 400 chipset and a mere 512MB of RAM, which means it doesn't have that much extra horsepower. Fortunately, we were pleasantly surprised in our first impressions; when we played with the 630, it felt a lot snappier than we originally expected. Of course, we'll have to see if that translates into regular real-world use in our full review when the time comes, but at least for now we'll take this as a good sign.

When the devices come to market in May, the single-SIM 630 will be $159, while you'll be able to get the dual-SIM variant for $169 and the Lumia 635 for $189. This may not be quite as inexpensive as the tremendously successful Lumia 520, but we'd be very surprised if we don't see a Lumia 530 or similar with Windows Phone 8.1 sometime in the near future.

In this article: 630, 635, build2014, lumia630, lumia635, microsoft, mobilepostcross, nokia, nokialumia630, nokialumia635
All products recommended by Engadget are selected by our editorial team, independent of our parent company. Some of our stories include affiliate links. If you buy something through one of these links, we may earn an affiliate commission.