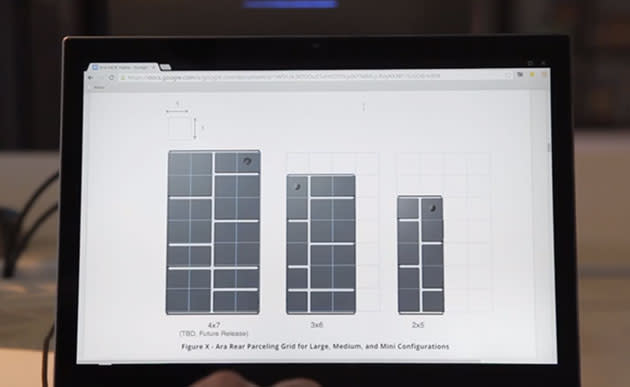 Project Ara has only exploded in prominence since Google unloaded Motorola earlier this year, and now we're getting yet another peek at the work in progress. The Phonebloks team just released a video showing off the progress Google and its partners have made on those modular smartphones, and things are coming along just as quick as you'd expect.

While this is ostensibly a video meet-and-greet with some of the folks working for the cause, there are still some tantalizing parts to gaze upon. We're given a quick look at how component modules like processors and cameras are held in place by electropermanent magnets -- they slide into place easily, and are locked and unlocked with a quick burst of voltage that'll ultimately be controlled with an app. For a few brief moments, we also get a look at the three different endoskeletons that those parts pop into side by side... if only in render form. The mainstream medium model is the one that's been getting all the attention lately, but the phablet-sized endo looks like it'll support 9 modules on its rear and the mini model that could sell for about $50 can handle at least 6. Not enough Ara meat for you? Never fear: the first Ara Developer Conference will take place on April 15, so expect most of the project's secrets to be spilled very shortly.

In this article: atap, google, mobilepostcross, modular, projectara, smarpthone, uk-feature
All products recommended by Engadget are selected by our editorial team, independent of our parent company. Some of our stories include affiliate links. If you buy something through one of these links, we may earn an affiliate commission.