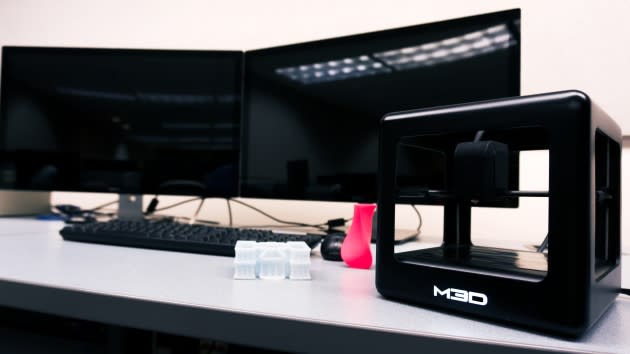 There are more than a couple of reasons why 3D printing hasn't truly hit critical mass, and the team at M3D thinks it's sidestepped them with The Micro, its $200 - $300 3D printer. The Micro is hitting Kickstarter today with the sole intention of becoming the first consumer 3D printer that's at once accessible, affordable and easy on the eyes.

"The dream here is definitely that you take something and install it as fast as the fastest plug-and-play device that you've ever seen and you're focused on the end result," Michael Armani, M3D's CEO tells us. "You take the design, put it in the printer, it prints as quickly as possible. The focus here isn't on the 3D printing process ... [it's] on 'yeah, I want to make a mold for chocolates.' It went to the fun part so you can enjoy it as much as possible." For example, we asked how long it would take from initial unboxing to having a spot of tea from the cup in the project's pitch video. The only reasons there'll be more than an hour between you and that first cup of Earl Grey are your teakettle and steeping preferences.

But even then, ease-of-use doesn't particularly matter if one of 3D printing's biggest barriers to entry doesn't change: price. Should you miss out on The Micro's limited early-bird $200 backing tier, getting a fully-assembled unit in your home will still only run $300.

"When we looked at 3D printers, we saw that the field was becoming hyped and that everyone was super curious about it," Armani says. "They can't go to Brookstone and try something that's in the price range of a present or a college gift, or something to try out and risk a little money on – they're all $2,000 or more."

To keep costs down, Armani and his team reduced The Micro's volume. He said that during manufacturing it's important to remember that product-size scales to the third power. If the device is made half the size in one dimension, it's actually being reduced by a factor of eight in terms of weight, material cost and shipping. "That's one way that we can pass savings on to the end-user."

M3D also has an eye toward bringing net cost down by decreasing how much power a Micro needs to run. Armani says that it operates at "an order of magnitude" more efficiently than any other 3D printer does, and, to achieve that, all the team had to do was increase the efficiency of the different components.

"When you reduce the power consumption, the price of everything drops," he says. "It's like a cascade reaction: now you need a smaller power supply and smaller wires. Now you don't have to spend so much on protection circuitry."

The Micro itself is, well, cute. It looks soft, finished and, perhaps most importantly, unobtrusive; it isn't a stretch to say that some of its color schemes make the printer resemble the Weighted Companion Cube from Portal. The Micro doesn't come off like an Erector set project, it looks like a gadget. That was no accident.

What struck us most during our conversation with Micro's team was how passionate and committed it is to delivering a hassle-free experience to the consumer from start to finish. If the staggering successes of its lower-priced (but more complicated and less functional) competition are any indication, M3D could have a massive hit on its hands.

"We hope to hold the position as the premiere consumer 3D printer that's accessible, easy to use and that you can set on your desk," Armani says. "When you combine all of that into one user experience, it'll hold a pretty key place in the market space."

In this article: 3dPrinter, DavidJones, household, kickstarter, M3d, MichaelArmani, themicro
All products recommended by Engadget are selected by our editorial team, independent of our parent company. Some of our stories include affiliate links. If you buy something through one of these links, we may earn an affiliate commission.