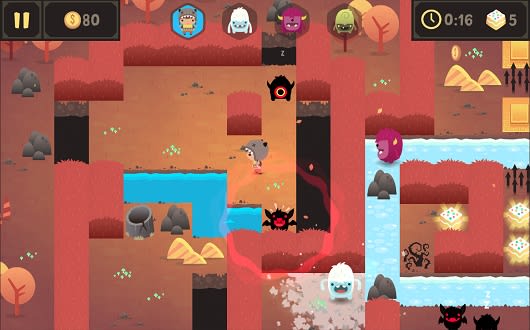 Indie developer SleepNinja will get a little help to bring Monsters Ate My Birthday Cake to Steam and mobile devices later this year, as it agreed to a publishing deal with Cartoon Network Games, the publisher confirmed to Joystiq. The developer earned $26,091 on Kickstarter in February 2013, enough to reach a stretch goal that will bring the game to Android in addition to PC, Mac and iOS.

"Cartoon Network have been great to work with and have definitely kept our backers in mind," SleepNinja Creative Director Justin Baldwin said via email. "Our publishing deal with them will not affect our backer's rewards; everyone will still be getting what was promised, and the game they were promised."

Monsters Ate My Birthday Cake is an "environmental puzzler" in the same vein as Nintendo's Legend of Zelda series that features a colorful 16-bit aesthetic that "doesn't rely on pixel art." While Cartoon Network Games primarily focuses on games related to its current properties such as Adventure Time, Monsters Ate My Birthday Cake will be its first original IP on Steam. Cartoon Network said it plans to publish "more than 10 mobile titles and at least four on Steam."
[Image: SleepNinja] 3
In this article: android, cartoon-network, ios, ipad, iphone, kickstarter, mac, mambc, mobile, monsters-ate-my-birthday-cake, pc, publisher, publishing, sleepninja, steam
All products recommended by Engadget are selected by our editorial team, independent of our parent company. Some of our stories include affiliate links. If you buy something through one of these links, we may earn an affiliate commission.