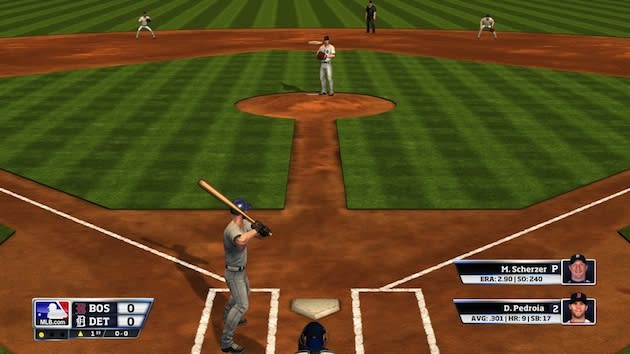 Major League Baseball is bringing back a classic. But while resuscitating an old title could sometimes create a double-edged-sword effect of sorts, that's not stopping MLB from taking the chance to reboot the R.B.I. Baseball series. Most importantly, R.B.I. Baseball 14 was developed in-house by MLB's Advanced Media branch, also known as MLBAM, a team that's behind applications like At Bat and whose tech powers the WWE Network streaming service. Up until now, sport games have been all about licensing, so this shift also lets us know how Major League Baseball views that industry. Sure, the experience in R.B.I. Baseball 14 might not be as full-fledged as with, say, Sony's MLB 14 The Show, but it's still interesting to see a professional league leveraging its work as a technology company too. It's about being able to deliver content for baseball fans.

One of the things MLB's new action-based sim game has going for it is that it's available on a number of platforms at launch, with support for more due in the near future. "It's about being able to deliver content for baseball fans," Jamie Leece, MLBAM's VP, Games, said to us when asked what lead to the development of R.B.I. Baseball 14. "The game works perfectly for both mobile and console; we wanted the experience to go hand in glove with that." As it stands, the revamped R.B.I. Baseball is available on iOS for $5, plus Xbox 360 and PlayStation 3 for $20 -- we're told Android, Xbox One and PlayStation 4 versions are coming "later this spring."

Can we expect more of these types of games from MLB? The league says the focus right now is looking at how the title is received by fans, as well as getting it ready for current-gen platforms. But there's a chance: "I certainly see us doing more in this space," Leece stated.

Update: It took about a month to get here, but those of you on Android can now start playing the game on your device. Just as it in the iOS App Store, R.B.I. Baseball 14 is also a $5 download from Google Play.

In this article: Baseball, hands-on, hdpostcross, Major League Baseball, MajorLeagueBaseball, MLB, MLBAM, mobilepostcross, RBI Baseball 14, rbi-baseball-14, Sports
All products recommended by Engadget are selected by our editorial team, independent of our parent company. Some of our stories include affiliate links. If you buy something through one of these links, we may earn an affiliate commission.