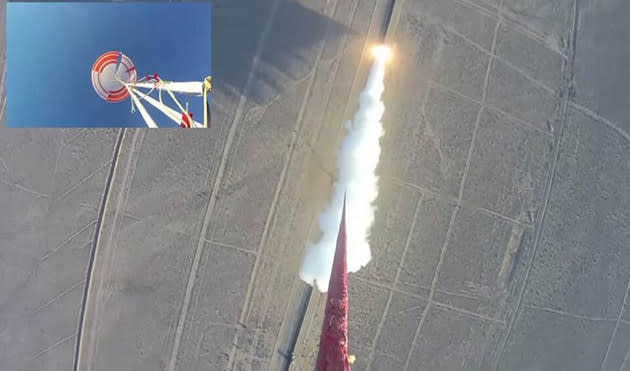 To make sure the (very expensive) equipment we're sending to Mars don't crash into the ground, NASA's putting its huge supersonic parachutes through a grueling test. Wait, what do parachutes have to do with Mars missions anyway? Well, if you read up on the Curiosity rover's risky landing in 2012, you'll see that NASA used a parachute to slow down its descent. That parachute won't work for the bigger things we're bound to send to the red planet in the future, though, so NASA designed a larger one called low-density supersonic decelerator or LDSD. The problem is, it's too big for most of the agency's wind tunnels and locations for testing, prompting the agency to create a special outdoor rig that simulates Martian landing.

NASA's contraption is a complex set-up that uses several elements, including a Night Hawk helicopter, hundreds of pounds of weight, a winch, a sled, rockets and a lot of rope. It's like a Rube Goldberg machine, especially since the process needs to go down in sequence, but the end task is nowhere near simple. A huge chunk of the parachute got ripped out in the video below, but since this test was designed to discover flaws, we'd say it was a huge success.

[Video] We break for Mars! We tested a supersonic parachute under Mars-like conditions: https://t.co/i8M8VxvAUg pic.twitter.com/BwMMbgazbs

In this article: curiosity, mars, nasa, science, space
All products recommended by Engadget are selected by our editorial team, independent of our parent company. Some of our stories include affiliate links. If you buy something through one of these links, we may earn an affiliate commission.