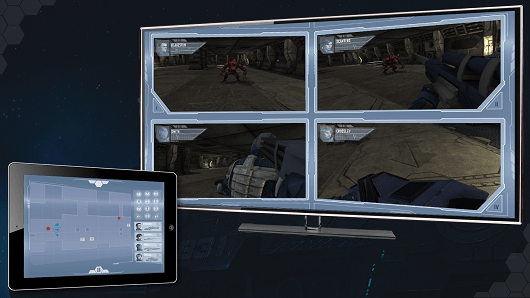 Opposable Games recently showed off Salvaged, a real-time strategy game that requires a bit of multitasking from its players. The tactical sci-fi game is played using two screens, one on any iOS or Android tablet or smartphone (as the controller) and the other being a monitor via PC, Mac or Linux.

In Salvaged, players act as one of many operators for a Remote Interstellar Salvage Crew (RISC), boarding wrecked ships to locate loot and retrieve each ship's black box recorders. The touchscreen in players' hands offers a top-down view of the frantic, squad-based action, allowing players to issue commands to their team and assess alien threats as well as interact with the wrecked ships themselves by hacking terminals, downloading data and restoring power and lighting. The second screen on players' PCs shows the operation in real-time through the squad's shoulder-mounted cameras.

The UK developer cited classic games like Captive and the 1993 version of Space Hulk as well both the original XCOM and XCOM: Enemy Unkown as inspirations for the game, though players may recall FTL: Faster Than Light and Spelunky when it comes to the game's replayability. Salvaged's crew, environments, enemies and spoils are all procedurally generated, and like the aforementioned roguelikes, once a crewmember dies, they will be gone forever.

The developer is seeking $125,000 by Thursday, May 15 to fund the game, of which it is just scratching the $10,000 mark as of this writing.
[Image: Opposable Games]
Source: Kickstarter
In this article: android, CrowdFunding, dual-screen, ios, ipad, iphone, kickstarter, Linux, mac, mobile, opposable-games, pc, Real-Time-Strategy, RTS, salvaged, sci-fi, smartphone, strategy, tablet, tactical, tactics
All products recommended by Engadget are selected by our editorial team, independent of our parent company. Some of our stories include affiliate links. If you buy something through one of these links, we may earn an affiliate commission.