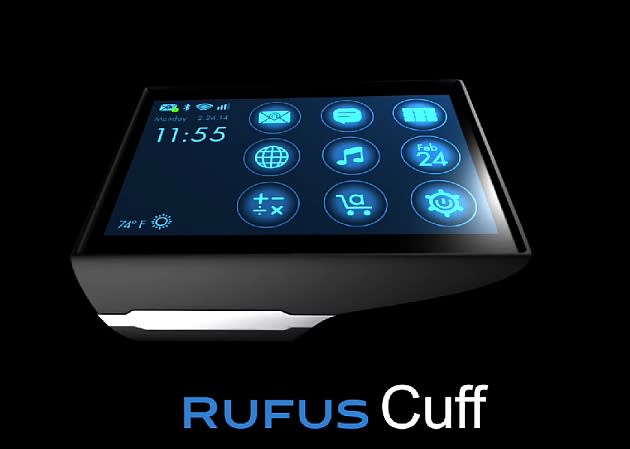 We told you to put on your disappointment pants for the Galaxy Gear 2, but for the Rufus Cuff we suggest rolling up your absurdity sleeves. Seriously, given its three-inch screen you might just have to. This wearable boasts a built-in mic, a camera, a speaker, web browser, voice control, GPS and full access to the Google Play store -- if the Cuff sounds like a smartphone that straps to your wrist, well, that's basically what it is. It connects to your Android or iPhone via Bluetooth for mobile data, making calls and sending texts, but it's running a full version of Google's mobile OS and can hook on to WiFi if you're in a cellular dead-zone or if your phone's battery runs out.

While the gizmo doesn't exactly look practical (we're pretty sure that it won't play nice with the cuffs of a slim-cut oxford), as of this writing it's has raised over $150,000 of its $200,000 IndieGoGo goal, with a handful of days to go. If you dig the idea of strapping one of these monstrosities on your wrist, all it takes is a $249 pledge.

In this article: android, IndieGoGo, iphone, mobile, mobilepostcross, SmartWatch, touchscreen, wearables
All products recommended by Engadget are selected by our editorial team, independent of our parent company. Some of our stories include affiliate links. If you buy something through one of these links, we may earn an affiliate commission.