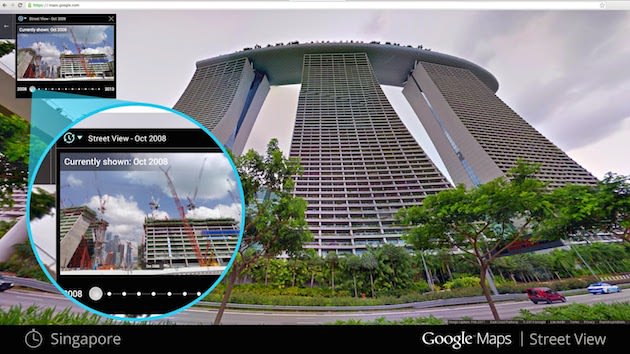 In the seven years since Google launched Maps, it's collected a ton of imaging and location data, which we've only been able to see in its most recent form. That's about to change, however, after the company announced it's opening all of that information up, allowing you to go back and see how much each of its locations have adapted during that period. Starting today, Google says it will begin rolling out the new feature across its desktop Maps service, adding a new clock icon to Street View images. Once clicked, you can move a slider and select the different thumbnails of a location in a particular space in time. You'll see skyscrapers go up, houses come down, and maybe even witness the rebuilding efforts of a community affected by a natural disaster. There's no word on whether it'll make its way beyond the desktop, so for now you'll likely only be able to procrastinate from the comfort of your home computer or office.

Source: Google Lat Long
In this article: google, location, mapping, maps, street view, time travel
All products recommended by Engadget are selected by our editorial team, independent of our parent company. Some of our stories include affiliate links. If you buy something through one of these links, we may earn an affiliate commission.