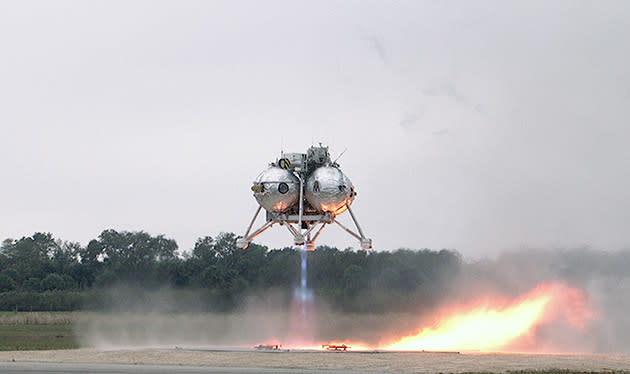 NASA's Morpheus lander has gone a long way since it crashed and burned in 2012. The agency's vertical landing and takeoff test vehicle now has a number of successful flights under its belt, including one that's just concluded at the Kennedy Space Center. On this most recent flight, the lander easily traversed 1,300 feet at a speed of 36mph for 98 seconds, proving that it has a future in delivering cargo to space. As always, Morpheus had a very important passenger during this event: the team's Autonomous Landing and Hazard Avoidance Technology. This equipment, called ALHAT for short, determines the best place to land by using lasers to scan for rocks and other hazards. That means it could be an essential tool when traveling to worlds we don't know as well as Mars or the moon, as it can guide spacecraft to safety without human input. We've sadly yet to see ALHAT in action, as this particular flight used a predetermined landing point. But, since Morpheus breezed through it like a champ, the team will let the sophisticated landing tech take the reins next time.

In this article: ALHAT, KennedySpaceCenter, morpheus, nasa, science, space
All products recommended by Engadget are selected by our editorial team, independent of our parent company. Some of our stories include affiliate links. If you buy something through one of these links, we may earn an affiliate commission.