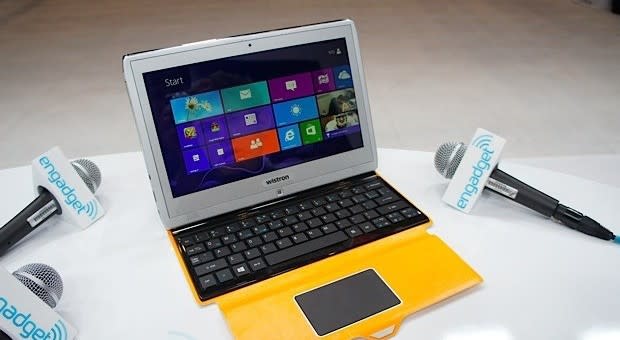 For all the success AMD has been having in the console and PC graphics spheres, none of it has really translated into the world of Windows-based tablets and ultraportables. The chip maker insists that's going to change in 2014, however, and it has released a number benchmarks showing that its latest processors have a lead not only over AMD's previous generation, but also over the Intel chips that currently reign supreme in these form factors.

We won't bore you with a gabble of numbers when you can check out charts for yourself in the gallery below, but the main curiosity here is probably the 4.5-watt tablet platform, known as "Mullins." This replaces last year's Temash processor, which had impressive gaming skills but failed to catch on in the market. AMD's in-house scores suggest Mullins offers much better performance per watt, with the new A4 Micro-6400T achieving a 15 percent lead over Intel's Bay Trail T (the Atom Z3370) in PCMark 8 -- a lead that could potentially be significant enough to bring the chip into more slim-line (and passively cooled) Windows 8 machines. What AMD doesn't reveal, however, is whether devices equipped with this A4 chip will have comparable battery life to Bay Trail, so it's all academic until actual, commercial devices come around.

9
In this article: amd, baytrail, benchmark, intel, mullins, processor, tablet
All products recommended by Engadget are selected by our editorial team, independent of our parent company. Some of our stories include affiliate links. If you buy something through one of these links, we may earn an affiliate commission.