Apple's improved Maps expand across the northeast US

Apple is fixing Maps using its own data 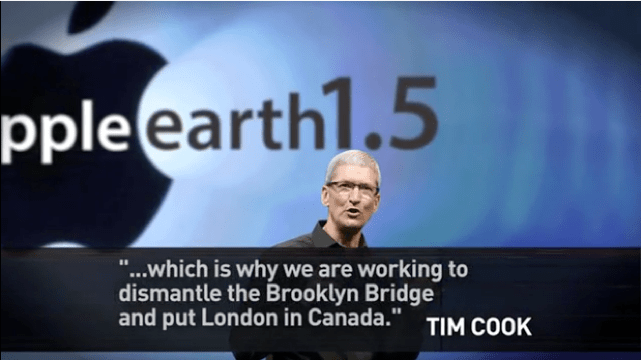 Now this is just funny. A hilarious video from The Onion states that Apple will respond to errors in its Maps app by rearranging the earth and its physical laws so that they match. Tim Cook is "quoted" in the parody as saying, "Apple is committed to making the best user experience possible. That's why we are working to dismantle the Brooklyn Bridge and put London in Canada." Very funny.

In this article: apple maps, humor, maps, the onion, tim cook, video
All products recommended by Engadget are selected by our editorial team, independent of our parent company. Some of our stories include affiliate links. If you buy something through one of these links, we may earn an affiliate commission.
Share
Tweet
Share