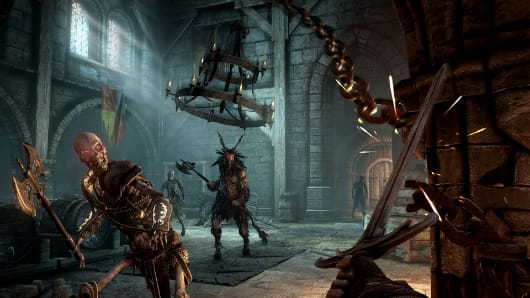 Hellraid, the medieval FPS from Dead Island studio Techland, is due out on Steam Early Access in the fall, with a full release on Xbox One, PS4 and PC in 2015. Techland delayed Hellraid in October, when it was still in development for Xbox 360 and PS3 alongside PC. Now, for consoles, it's next-gen only.

Techland is using the extra time to add new features. Hellraid now has three gameplay options, each available as single-player or up to four-player co-op: Story Mode, Mission Mode and Arena Mode. Story mode is the campaign, where players must keep the forces of hell at bay. Mission Mode offers arcade-style leaderboards for beating the highest combos and scores, and Arena Mode throws waves of demons at you.

"The combat experience is furthermore enhanced by weapon crafting, interactive environments, destructible objects and environmental traps, as well as challenging and adaptive enemy AI," Techland says. "The game is currently undergoing a transition to the Chrome Engine 6, the latest version of Techland's proprietary technology, which is also used by the next-gen zombie survival horror, Dying Light."
[Image: Techland]

4
Source: Techland
In this article: hellraid, microsoft, pc, playstation, ps4, Techland, xbox-one
All products recommended by Engadget are selected by our editorial team, independent of our parent company. Some of our stories include affiliate links. If you buy something through one of these links, we may earn an affiliate commission.