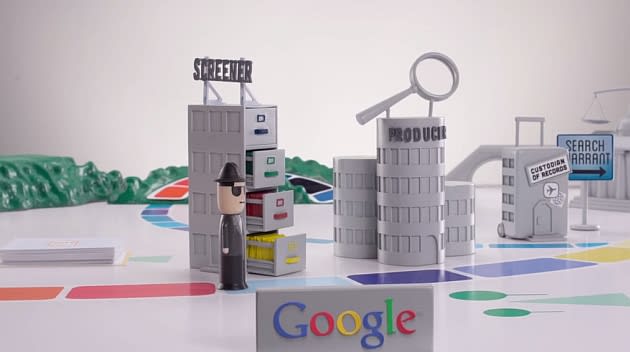 The companies that asked the US government for permission to publish federal data requests last year have apparently lost their patience waiting for a reply. Apple, Facebook, Google and Microsoft are updating their privacy policies to expand the types of disclosure notifications they give individual users about how often and when the government requests their data. As The Washington Post tells it, the tech companies will only reign themselves in in the event that they receive gag orders from a judge or someone else with legal authority. Naturally, the government isn't too keen on this and the Department of Justice worries that this could give criminals under investigation ample time to flee or even destroy any evidence that could be used against them.

Google updated its policy this week, adding that data is only withheld when there's "imminent risk" of physical harm to a potential crime victim, while an Apple spokesperson said that later this month the company will update its policies so it can notify customers in "most cases" when law enforcement requests their personal information. Neither Apple nor The Social Network or Redmond, however, have finalized their updates just yet. If it helps you sleep a little better at night, the Post reports that companies that notify their users have a little more sway with the fuzz: apparently investigators would rather drop their data requests entirely rather than suspects learn they're being watched.

Source: Washington Post
In this article: apple, data, facebook, google, internet, microsoft, policy, privacy, transparency
All products recommended by Engadget are selected by our editorial team, independent of our parent company. Some of our stories include affiliate links. If you buy something through one of these links, we may earn an affiliate commission.