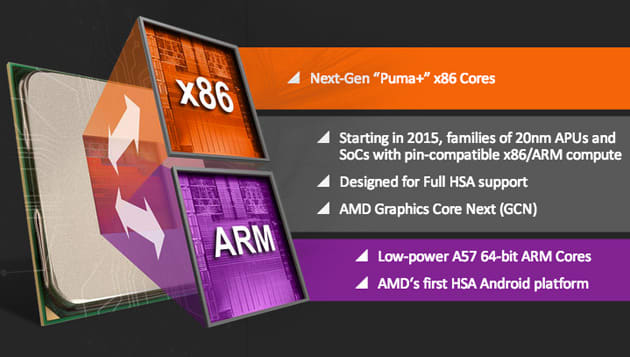 Typically, you can't reuse many parts when you switch processor technologies; if you change chips, you change the entire motherboard at the same time. That won't be true for AMD in the future, though. It's working on a common chip framework, Project Skybridge, that will let 2015-era ARM and x86 system-on-chip processors share the same pin layout. In other words, a basic motherboard design could handle both CPU types.

This doesn't mean that you'd get to walk into a computer store, buy a motherboard and use your choice of ARM or x86 hardware in your new desktop. Rather, Project Skybridge would be for mobile and embedded gadgets -- neither AMD nor device makers will have to reinvent the wheel just because they're thinking of building x86-based Android tablets or ARM-based industrial gear. It's also a hedge against obsolescence. AMD sees the computing world shifting toward ARM, and it doesn't want to be stuck supporting only Intel's x86 technology in the long run.

That's just the start of the semiconductor firm's expanded ARM plans, too. A 2016 core, K12, will be AMD's first 64-bit ARM design. Most of its details are a mystery, but AMD says that the new processor focuses on high frequencies (clock speeds) and expanding ARM's sphere of influence. That suggests that K12 will target heavy-duty tasks. It may not wind up in your pocket, then, but it could handle more duties that were previously reserved for desktops.

Via: AnandTech (1), (2)
Source: AMD
In this article: amd, android, arm, cortex-a57, embedded, k12, opteron, processor, projectskybridge, puma, pumaplus, skybridge, soc, systemonachip, systemonchip, x86
All products recommended by Engadget are selected by our editorial team, independent of our parent company. Some of our stories include affiliate links. If you buy something through one of these links, we may earn an affiliate commission.