Moby is selling his vintage drum machine collection for charity 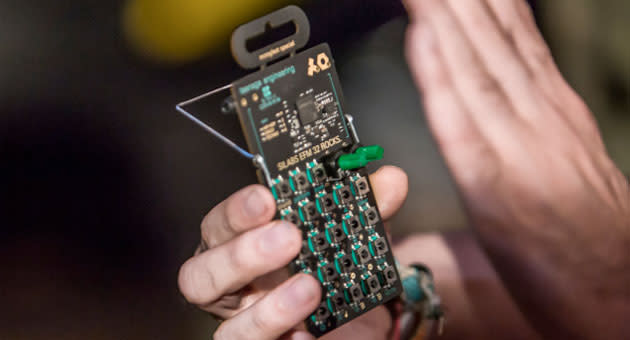 Tucked neatly into a panel discussion at last week's Moogfest, Teenage Engineering outed its latest synthesizer effort. The unit, labeled the PO-12, was intended to be a giveaway during the festivities ("moogfest special" is printed on the built-in hang tag), but the units got caught up in a customs delay, so we're left with details nabbed by attendee Robert Pluma. Here's a quick rundown of some of the reported specs: a Silicon Labs 32-bit ARM microcontroller, wire stand that doubles as a pitch bender, 23 switches, two optimization knobs, beats-per-minute LED and 1/8-inch audio jacks. There also appears to be options for hip-hop, disco and techno on the gadget that's said to be priced at $49.

While Teenage Engineering isn't confirming the details, it did tell Synthtopia that Pluma "more or less nailed it regarding the details of this product." The folks at Create Digital Music report that the device will also harness parameter lock, just like the original Machinedrum. We'll have to wait a bit longer for formal availability info, but this tease is certainly enough to whet the ol' appetite... for now.

In this article: drummachine, moogfest, moogfest2014, po-12, synth, synthesizer, teenageengineering
All products recommended by Engadget are selected by our editorial team, independent of our parent company. Some of our stories include affiliate links. If you buy something through one of these links, we may earn an affiliate commission.