When we asked you what you wanted to hear about at EVE Fanfest 2014, the biggest area of interest was EVE Online's New Player Experience. Every player who's ever signed up to EVE following news of some huge battle or event will remember the frustration of his first few days in the sandbox. A new player's first experience of EVE is wading through windows full of text in a succession of boring tutorial missions that could take you hours or days to get though, followed by being ejected into the big bad world with very little direction. If that's been your experience of EVE, you might be interested to know that something's finally being done about it.

Developers revealed during Fanfest that of all those who sign up to EVE and pay for a month's subscription, 50% of them don't renew and a further 40% or more end up in solo professions like mining and mission-running, which have the highest rate of player turnover. Only between 5% and 10% of those who sign up will ever get into the kind of gameplay that attracted them to EVE in the first place. CCP's response? Completely remove the tutorial.

Read on to find out why killing the tutorial could be the best thing that has ever happened to EVE's new player experience. 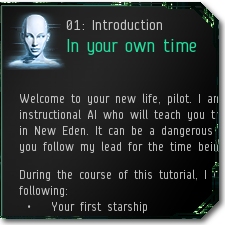 What's wrong with the tutorial?

The blame for players failing to assimilate into EVE has been placed squarely on the tutorial mission arc, which teaches players to rely on the direction provided by missions much as in a themepark game. When the tutorial ends and the new player is dumped into space on his own, he'll usually experience a "what now?" moment that can lead him to quit and say the game is boring or to cling to the direction provided by mission-running and never do anything particularly sandboxy. Naturally, this doesn't match up with expectations new players have from tales of big heists or battles like the Bloodbath of B-R5RB.

By getting rid of the tutorial, CCP will no longer be funneling players into missions or away from the sandbox gameplay they're interested in. Developers are then free to replace the tutorial with something that better matches the expectations of new players. One developer I spoke to even said that CCP would like to eventually get rid of mission-running completely from the game and replace it with a more immersive PvE experience. Newer PvE modes like wormhole anomalies and incursions don't rely on pages of text and are very popular, so it's natural to think the rest of EVE's PvE will go that way eventually.

Part of the reason for abolishing the tutorial is to remove extrinsic motivators like ISK from the new player experience. Players already come to EVE with their own very powerful intrinsic motivators; they sign up because of an article they read about wormhole theft or a video of a huge alliance battle and want to be a part of something like that. CCP's new plan is to let players find their own ways toward whatever goal they come to EVE with through something being described as "opportunities." The core idea is to simply highlight all the opportunities that are out there in the EVE universe and let new players engage with them at their own pace. This should fix the "what now?" scenario so many new players encounter without forcing them down one particular path. 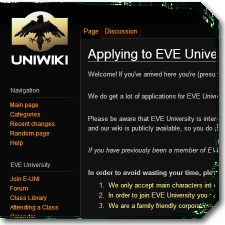 So how will the new feature work?

The example used by many of the developers I spoke to on the topic was Minecraft, in which players find unknown items or see them named in achievements and then naturally head straight to the Minecraft wiki to learn more. CCP wants EVE to adopt a similar philosophy by giving new players just enough information to find out what they need to on their own via Google. Rather than try to explain the practically infinite different paths players can take in EVE or roles they can fill, CCP will make sure that job will fall to the players and members of the media who already do a good job at it.

It sounds fantastic in theory, but I'm told that this feature is still very early in development. Developers I spoke with after Fanfest confirmed that there are several competing designs right now, some involving the System Scanner and others that are similar in design to the ISIS Ship Identification System. Perhaps the most promising suggestion was that a new notification system could pop up a context-sensitive message when something happens for the first time, such as when you first approach a stargate or target a player. Players could then explore the gameplay at their own pace and in any order they want, rather than try to memorise pages of text from a pre-set series of tutorials.

One of the major themes running throughout Fanfest was that the game should be easier to understand and interact with for all players, which in turn will help bring new players into the fold. Developers plan to do this in the upcoming Kronos expansion by replacing EVE's dreaded spreadsheets and windows full of text with contextual UI elements and information-packed tooltips.

In the same way that ISIS has helped new players see ship options they never knew existed, it's hoped that Opportunities will show all players the gameplay options open to them that they might not have considered before. If you've ever had a hard time getting into EVE or just couldn't get past the spreadsheets-in-space user interface, the day is fast approaching when you might want to give the game another try.
In this article: ccp, ccp-games, eve, eve-fanfest, eve-fanfest-2014, eve-online, eve-online-fanfest, eve-online-fanfest-2014, event, event-coverage, fanfest, featured, half-feature, iceland, internet-spaceships, massively-event-coverage, reykjavik, sandbox, sci-fi, spreadsheets-online
All products recommended by Engadget are selected by our editorial team, independent of our parent company. Some of our stories include affiliate links. If you buy something through one of these links, we may earn an affiliate commission.