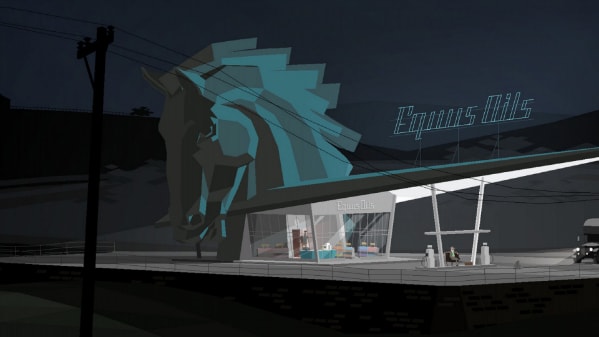 Chicago-based developer Cardboard Computer has launched the latest installment for its mysterious adventure game, Kentucky Route Zero. The latest episode is the third act of five, the final two of which are expected to arrive "throughout the next year or so," according to the game's site. Season passes for the game are currently 25 percent off ($18.74) through Steam and the Humble widget on Cardboard Computer's site, and will stay discounted until Tuesday, May 13.

Described as a "a magical realist adventure game," Kentucky Route Zero follows the people that travel a "secret highway in the caves beneath Kentucky." The first episode launched in January 2013, one month before its arrival on Steam, followed by Act 2 in late May 2013. Cardboard Computer originally anticipated a three-month span between each episode, previously pegging its finale for January of this year. The developer earned $8,583 on Kickstarter in February 2011 to fund the game.
[Image: Cardboard Computer]
Source: Steam, Twitter, Kentucky Route Zero
In this article: act-3, adventure, cardboard-computer, discount, episode-3, episodes, Episodic, humble-store, kentucky-route-zero, mac, pc, sale, season-pass, STEAM
All products recommended by Engadget are selected by our editorial team, independent of our parent company. Some of our stories include affiliate links. If you buy something through one of these links, we may earn an affiliate commission.