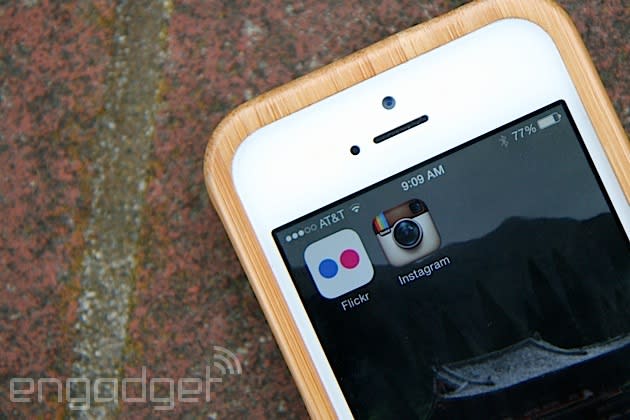 Flickr's latest app is its best yet, but even that might not be enough to save it.

I posted my first-ever selfie on Flickr on July 11, 2004. Taken with the rear camera of a Sony Ericsson T616, the photo was horrendously grainy at a resolution of 288 x 352. But at the time, taking a picture with my phone and uploading it to a website (via MMS, no less) was a strange and wonderful thing. I would soon grow to use Flickr for photos taken with a regular camera as well, but it was that initial brush with mobile technology that drew me into its fold. Ten years later, and the landscape of mobile photography has changed dramatically. Not only can smartphones snap pics that rival the ones from point-and-shoot cameras, but also uploading those images to the web is as easy as using an app. Unfortunately, the rise of smartphones, and the subsequent fall of dedicated cameras, led to a decline in Flickr's utility. Heeding the siren call of the iTunes App Store, the site released an iPhone app in 2009, but early versions were clunky, slow and woefully insufficient. Uploads took forever even though image quality was downsized to 600 x 450, and users were forced to log in via Safari.

As Flickr struggled to get its mobile act together, a serious competitor emerged in 2010: Instagram. It wasn't perfect -- you could only upload square pics and you couldn't group them by album. But unlike Flickr, Instagram didn't have to worry about integrating a photo behemoth into its mobile offerings -- it could just be lightweight and nimble, as a mobile app should be. Under Marissa Mayer's new leadership, Flickr attempted an app revamp in 2012. It introduced a whole slew of editing features and photo filters along with new sharing capabilities that put it more in line with the competition. But even that felt like an attempt to shoehorn the site's sprawling web presence into a tiny screen. Pictures in the main welcome area looked small on mobile, and if you wanted to view them in full resolution, you had to tap them twice. Which is why the Flickr 3.0 redesign that rolled in a couple of weeks ago struck me as so important. At last, it seemed, Flickr had finally gotten a clue and made its app more mobile-friendly. The main viewing area, for example, is similar to Instagram's, with square images and the ability to seamlessly fave, comment and share a photo without ever leaving the river. Lest you think that all your Flickr photos are now forced into squares, don't fret -- they just appear that way in the feed. To view an image in its full resolution, you just tap the photo and it's there in all its glory, in portrait or landscape. This, I felt, is what made it so much better than Instagram. No longer was I limited to square-shaped photos -- they could be in any orientation or size I wanted, and the app could handle it just fine.

At last, it seemed, Flickr had finally gotten a clue and made its app more mobile-friendly.

Bernardo Hernandez, who currently heads up Flickr at Yahoo, said that it didn't intentionally mimic Instagram's layout. "We chose the square format because it was the most balanced way to display different aspect ratios for different pictures," he said. He pointed out that you can even zoom in on photos, which you can't do on Instagram. Further, with the new Flickr app, someone could upload a whole swath of photos without the images dominating your feed. Instead, a triptych or split images are used to indicate multiple pics, with a link inviting you to "View all" photos underneath. Fittingly, you can also upload several photos at once and add them to albums or groups.

At long last, Flickr 3.0 also adds video to the mix, allowing you to record and upload clips of up to 30 seconds, which handily beats the 15-second limit on Instagram. Another big differentiator is the choice to limit the audience of select photos. With Instagram, your entire stream has to be either private or public -- you can't mix and match different privacy settings within the same account. Last, but not least, you can also automatically upload every picture you ever take to Flickr. As the service offers one terabyte for free, that's not an entirely bad idea. On the whole, this is the best app Flickr has ever released, and in terms of design and features, it beats Instagram handily. With over 5,000 photos on the service, I was thrilled to be back on Flickr after a years-long affair with Instagram.

At first. After just two weeks delving deep into the Flickr app, I found myself going back to Instagram. As wonderful as the new app was, it was missing one key ingredient: my friends.

Back in the day, Flickr was not just one of the best options for storing your photos online. It was also a bustling community filled with amateur photography enthusiasts and early web adopters, many of whom were my friends. In many ways, Flickr was the reason my affinity for photography blossomed. I learned tips and tricks at Flickr meetups and photowalks. I wasn't on Flickr just for the pretty pictures. I also wanted to see where my friends went on vacation and what they did over the weekend, and I'm pretty sure the feeling was mutual. Sure, it was a place for professional photogs to show their work, but the real appeal, for me anyway, was in a social network with photography as an entry point.

As wonderful as the new app was, it was missing one key ingredient: my friends.

Somewhere along the line, however, the community just dissipated. You could blame Yahoo for forcing its login system and not working harder to keep the community happy, or say that everyone just moved on to Facebook as their social network of choice. In any case, my friends who once used Flickr as their primary photo-sharing site are now sharing them elsewhere. Even those who still post to Flickr are cross-posting from Instagram.

Not everyone has given up. Longtime Flickr user and professional photographer Thomas Hawk still remains enthusiastic about the site. "My favorite place to store photos online is Flickr," Hawk said. "As a grandfathered Pro account on Flickr, I can post an unlimited number of full high-res photos on the site." However, he too admits that he has a much larger audience on Google+ and Facebook, adding that while Flickr is good for online storage, it's not so great for community. Scott Beale, a founder of Laughing Squid who was once dubbed the "official photographer for Web 2.0," agrees. He said there's not much community there these days. Another popular photographer, Trey Ratcliff, hardly uses Flickr at all, preferring instead to share his photos on Google+.

Hernandez said Yahoo wants Flickr to be a destination for photography enthusiasts of all levels. "Ten years ago, only professional photographers could take really beautiful pictures. Now, everyone's a photographer with the high-res cameras on phones," he said. Flickr was built as a platform for photography, he continued, stating that the site has a community full of people who are passionate about the art form.

"We've made a really conscious effort in bringing the community back," Hernandez said. "We have tremendous engagement -- we have the largest photography community product on the web." There's a tremendous need to learn how to take a picture, he said, and Flickr's community of photographers fulfills that need. While that may be true, the rise of mobile photography is proof that most people don't really care about how good their photos look. Instagram is still the most popular mobile photo app after all these years. (It's currently number two in the Photo & Video category in the iTunes App Store, second only to Snapchat.)

A random glance at Instagram's Explore tab shows a blurry photo of someone playing the saxophone, a fuzzy white cat and a selfie of a teenager. Flickr's Explore page, on the other hand, shows jaw-dropping vistas of beaches in Hawaii, a beautiful image of a farm in Tuscany and an artistic shot of streaks of light at a London bus stop. At a glance, Flickr is a site for people who want to take great photos. Instagram, on the other hand, is a place for people who want to share goofy pictures of their everyday lives. And when it comes down to it, most of us are the latter.

In this article: android, flickr, flickr.com, instagram, ios, mobilepostcross, selfie, selfies, yahoo
All products recommended by Engadget are selected by our editorial team, independent of our parent company. Some of our stories include affiliate links. If you buy something through one of these links, we may earn an affiliate commission.