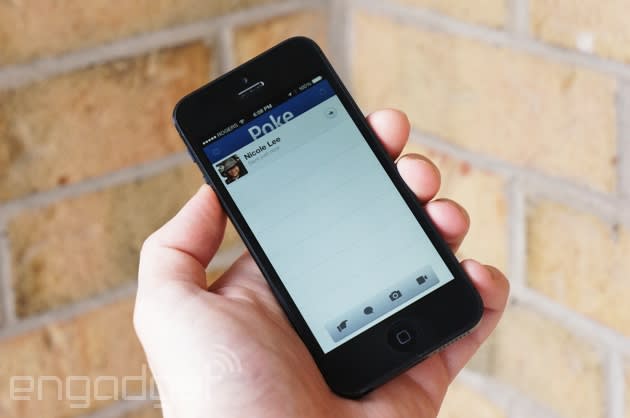 Remember that Poke app that Facebook released a couple years ago? Yeah, we're guessing no, which might explain why the company has decided to put the kibosh on it and pulled it from the App Store. If you did manage to snag the app back in the day, you might recall that it allowed you to not only "poke," but also send a message, picture or video to Facebook friends, with those missives set to expire after 1, 3, 5 or 10 seconds. Also on the guillotine is Facebook's standalone Camera app, which we're not sure if anyone knew existed. Getting rid of these two apps isn't entirely surprising, as features from both have been incorporated into the big blue one over the years. Though killing them seems counter to the company's recent trend of unbundling its core app, we suspect it's more to do with getting rid of the old to make room for the new. To those who want to keep poking their friends on Facebook though, don't worry -- you're still able to do so via the web.

Source: The Verge
In this article: apps, camera, facebook, ios, poke
All products recommended by Engadget are selected by our editorial team, independent of our parent company. Some of our stories include affiliate links. If you buy something through one of these links, we may earn an affiliate commission.