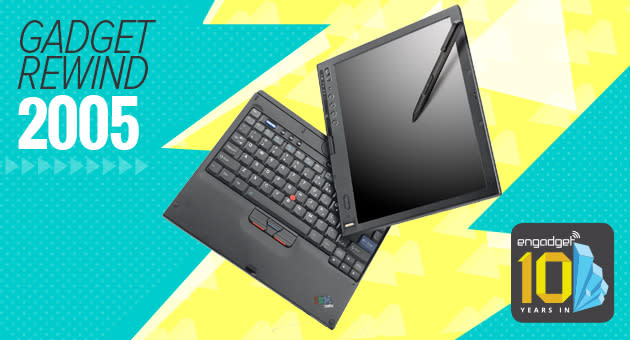 Lenovo made headlines earlier this year when it took Motorola Mobility off of Google's hands, giving it a boost in smartphone markets outside of its usual stomping grounds. But that wasn't the first time it snatched up another company for industry leverage. In 2005, IBM gave up majority control of its PC business, allowing Beijing-based Lenovo to take over and effectively expand its reach to a global audience. The timing of the deal was a little bit off, however. One of the first products to launch under Lenovo's new ownership was the ThinkPad X41 Tablet, a laptop/tablet hybrid, which had already rolled off the assembly line and was still sporting an IBM logo.

It was a niche product back in 2005, but if you were an early adopter, it might have been the perfect tool. Though the X41 wasn't the first hybrid tablet/PC to debut in the ThinkPad line, it did arrive with significant upgrades over its predecessors, like wireless networking, a 12.1-inch display, vastly improved processor capability and a 180-degree rotatable display.

The X41 Tablet also sported many familiar ThinkPad flourishes, including the iconic red TrackPoint nub, a stowable stylus and an irksome display latch that got caught on just about anything when the device wasn't snapped shut. Lenovo eventually eradicated that latch from the ThinkPad's oeuvre of quirks during its 2013 overhaul, and continues to make progressive changes to the line's design.

At the time of its launch, consumers appreciated the X41's relatively slim 3.5-pound weight and the pleasant paper-like feel of its screen when used in tablet mode. Its software experience, however, wasn't exactly polished -- it was the first ThinkPad to run Windows XP Tablet PC Edition software. Sure, it had a dose of digital pen support, handwriting recognition and speech input added to the mix, but it was still undeniably Windows XP underneath. Some users who tried the X41 Tablet remember it more for its glitchy software experience than the convenience of its combined form factors.

The X41 Tablet may have been an ungainly oddity when it first launched, but its hybrid form has gone on to become something of an industry standard for today's post-PC devices.

Did you own a ThinkPad X41 tablet PC? Add it to your Engadget profile as a device you had (or still have) and join the discussion to reminisce or share photos of your device with other like-minded gadget fans.

In this article: 10yearsin, 2005, digitizer pen, gadget rewind, gadgetrewind, gear, hybrid, ibm, lenovo, lenovo x41 tablet pc, motorola mobility, personal computing, personalcomputing, rewind, stylus, tablet, thinkpad
All products recommended by Engadget are selected by our editorial team, independent of our parent company. Some of our stories include affiliate links. If you buy something through one of these links, we may earn an affiliate commission.