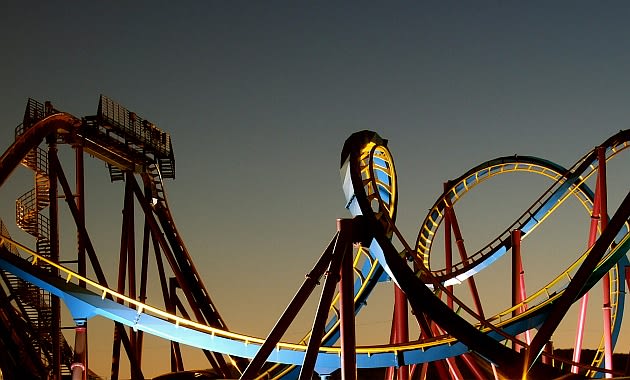 It's hard to imagine getting bored on a roller coaster, but a pair of English gents figured out a way to make riding the rails even more thrilling: adding VR to the mix. The duo took a publicly available model of an undisclosed UK theme park's coaster, and imported it into the Unity game development suite. From there, the two smuggled a laptop, mouse, power supply, camera and an Oculus RIft past park security. After getting into the car and outside the unblinking gaze of the ride's cameras, out came the VR headset. The idea of the experiment was to test real-life physical feedback synced with a virtual experience, sans a fancy home-built setup. Of course, the concept of riding a roller coaster while experiencing a virtual recreation of said coaster seems redundant, but the team's ambitions go a bit beyond that surface idea.

If you check out the embedded video, you'll see that in the VR version, the track is floating in outer space. The creators told Road to VR that possible augmentations could include sitting in the cockpit of a fighter jet and doing barrel rolls to avoid bogeys, or even having the roller coaster's track crumble in front of you. For some (me included) the latter could be even more terrifying than the actual ride. The pair say that they're hoping to explore furthering their idea with a theme park sponsor and that they have a new, similar, project in the works. Since I'm a tad squeamish, I'll stick to being a virtual paperboy, thank you very much.

Source: Road to VR
In this article: edmondodriscoll, gaming, hd, hdpostcross, jonathanforder, OculusRift, riftcoaster, RollerCoaster, ThemePark, uk, video, VirtualReality, vr
All products recommended by Engadget are selected by our editorial team, independent of our parent company. Some of our stories include affiliate links. If you buy something through one of these links, we may earn an affiliate commission.