We're starting the day off with a Wildstar question, but have no fear -- there's WoW in them hills.

do you remember the AVR addon? Play in the Wildstar beta? I wonder if Blizzard is having second thoughts? It just struck me as ironic that other people spent time developing something at no cost for Blizzard that Blizzard took out and similar functionality is becoming more common in MMOs.

I have been playing the Wildstar beta and I feel the combat systems between the two games are different enough that AVR (Augmented Virtual Reality) is far more important to Wildstar than WoW. In WoW, you target an enemy and your single-target abilities are focused on that enemy. Or for healing, an ally. In Wildstar, every ability (or every ability I've received in my short time playing) is an AOE. Either the ability acts in a ring around you or a cone in front of you. In the case of melee attacks, there isn't really a "melee range" to consider, but rather the cone of your attack. Without an indication of that on the screen, combat would be a mess. 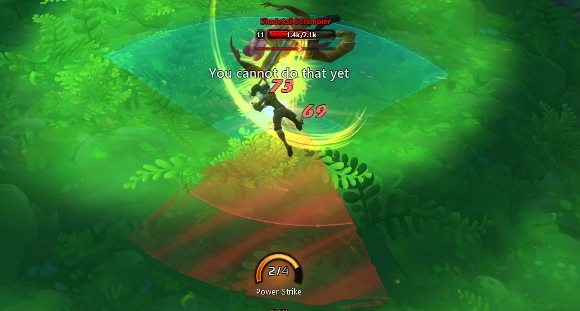 As it is, combat in Wildstar feels pretty chaotic -- I haven't done any endgame obviously, but questing, it felt like everything was moving all over the place, all the time. In World of Warcraft, you're generally stationary unless moving in and out of an AOE. After the first time you see that AOE, you know how big it is. At least, you have an idea. In Wildstar, everything is an AOE so you can't track that so easily. Wildstar also keeps you looking at the gameworld rather than at castbars. You use your interrupt when you see a red circle/cone appear in front of your enemy, not when a castbar appears on their nameplate.

So I think AVR is the right choice for Wildstar, but not World of Warcraft. And that being said, I didn't like the AVR in Wildstar very much. In theory, you were looking at the gameworld in combat. In practice, I wasn't really seeing the gameworld. I was seeing red and blue circles and cones on the floor. Personal preference, obviously. As an optional tool? I think AVR would quickly become non-optional in any MMO. The sort of advantage it would offer is too large.

Was there ever any complaint about who they chose to be the Rogue Hero? I just feel like Valeera is such a non-character to most people, only ever showing up in WoW once, in a quest that's now been removed, and even then she didn't really do anything.

They had plenty of great other options from Garona, either of the Van Cleefs, or even Matthias Shaw of SI: 7. I get that they probably didn't go with Garona to avoid making the Heroes even more Orc-heavy, but still. Their use of Valeera just irks me.

Were there complaints? Yeah. I saw them for sure. I saw them for many characters! Why Anduin instead of Velen? Why Garrosh instead of the millions of other warriors in Warcraft? I don't know the actual answer to why they chose Valeera, so I'll speculate on a few things here.

First, Hearthstone's initial release uses almost entirely pre-existing art assets. If not from the first iteration of the TCG, then other promotional artwork they've made for the game. That already limited their options. Of course, Edwin Van Cleef already has a card in the game, so they could have picked him. It could be they were aiming for "heroes" as all of the ... you know, heroes, but then you have to consider Garrosh and Gul'dan, I suppose. Those two aren't good guys.

I feel there may also be a disconnect of sorts between what the game's writers and the game's players see as major characters. That's something that happens all the time in books and television. Think of your favorite TV show, right? I'd guess your favorite character isn't the protagonist. And yet the protagonist continues to be the central character of the show. I've been binging on Once Upon a Time lately and I pretty much hate Snow White, Prince Charming, Emma, Henry, Regina, and so on. I don't care about them at all. But they're the central figures. I love all of the side characters, though. It happens all the time.

As players, we probably have more affinity for the Van Cleefs, Matthias Shaw, and so on than the writers/creators do. We've spent more time interacting with those characters than the writers did writing them. In the grand scheme of the story, those characters are small potatoes, but they had a lot of impact on our formative years in the gameworld. Meanwhile, Valeera was kind of a big deal in the story during her run as part of Varian Wrynn's posse. If you didn't read those comics, you probably didn't care about her. If you wrote them, they'd be a big deal to you.

Or maybe I'm full of crap and it was totally random.

I think I'm looking into something a little to much but it's irritating me while I'm reading War Crimes... When people are all talking to each other, when I say people I mean 3 sometimes 4 or 5 different Races are talking to each other what language can we assume they are speaking? I can't see why an Orc would speak common to a Pandaren and Night Elf yet I can't see a Night Elf speaking Orcish.

Can we assume there is another language that we don't know of that everyone can speak... Something like Azerothian? Or am I just being silly and nit-picking?

If it eases your mind, assume they're speaking some kind of common pidgin language. Azerothian, sure.

In reality, writing a book where half of the characters can't talk to the other half really sucks. It's an unnecessary complication. The author would have to insert background characters that are translators for every single word spoken. If not mention it line-by-line, then constantly remind you that translation is happening. While you could do funny things with that, it's often not worth it. It also limits the sorts of character interactions you can have. Could someone from the Alliance and someone from the Horde have a heart-to-heart conversation? Nope. It's often best to just ignore that whole language issue. It gets tedious for both author and reader if they don't.

As an addendum to that last bit, language barriers can work if your goal is to specifically set up tension through lack of communication. That works okay when you're dealing with massive forces, two enemies moving against each other with little chance of diplomacy. In something like Warcraft where individual characters are more important, the language barrier is not-so-good.

Also, remember that characters from both factions talked to each other all the time in the RTS games. And do so in cutscenes in-game. The language barrier in World of Warcraft is a gameplay construct so people from opposing factions can't communicate and be jerks to each other.

Have questions about the World of Warcraft? The WoW Insider crew is here with The Queue, our daily Q&A column. Leave your questions in the comments, and we'll do our best to answer 'em!
In this article: avr, languages, war-crimes, wildstar
All products recommended by Engadget are selected by our editorial team, independent of our parent company. Some of our stories include affiliate links. If you buy something through one of these links, we may earn an affiliate commission.